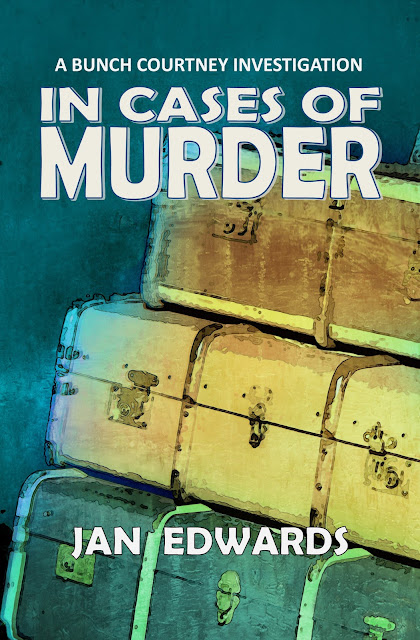 About In Cases of Murder:

When the body of Laura Jarman is discovered crammed inside a steamer trunk and dumped on a Brighton railway station platform, her wealthy industrialist family is shouting for answers, but their reluctance to co-operate with the investigation arouses suspicion. Shortly after, a second body - Laura's flatmate Kitty ­- is discovered in similar circumstances.

What links Laura and Kitty to the private gentlemen's parties held in a country house on the edge of sleepy Wyncombe village, and what is Laura's family so desperate to conceal? Bunch Courtney and DCI William Wright find themselves racing along a convoluted trail through munitions factories and London clubs to a final shocking end.

Bunch paused at the mortuary doors to gaze at the calmness of the cemetery beyond, wondering for a moment why on earth she was here at all. I could have refused. God alone knows I’ve got enough to do on the estate. “Yet here I jolly well am. And here I go.” She plunged into the chemical-tainted interior, pausing to show her identity card to the elderly porter at the desk. “I am expected.”

“Yes, Miss. Doctor Letham and Chief Inspector Wright are waiting for you.”

Bunch pushed through the double doors into the antiseptic chill of the post-mortem room and smiled as Wright and Letham turned away from the body on the mortuary table to face her. “Good morning, gentlemen,” she said. “Have I kept you waiting long? I do apologise.”

“Morning, Miss Courtney. No, you’re as punctual as always,” said Letham. “You’ll forgive me for not shaking hands.”

He was a slender neat man with thinning hair brushed hard back from a thin face. And must have been handsome in his youth, she thought. Still would be, were it not for those glasses. Dark, much-mended tortoiseshell frames dominated Letham’s face, partially hiding dark eyes that gazed back at her with a shrewdness she always found disconcerting, as if he saw not a woman but a set of muscles and bones and organs. He was never anything but courteous if, to Bunch’s mind, disturbingly impish, an image only enhanced by his soft Edinburgh lilt. He executed an extravagant bow, sweeping both rubber-gloved hands out at waist level like a courtier to his queen. Bunch’s smile widened and she wondered if he’d guessed how apprehensive she was feeling, and why.

“Rose,” Wright said and nodded in an echo of Letham’s greeting, his smile less broad but no less sincere. He glanced at the clock. “In fact, you’re a little earlier than I expected.” Wright was taller than Letham and looked plainly younger despite fatigue lines gathering around his grey eyes and long, almost equine face.

He must be growing on me, she thought. In this light he reminds me a little of Leslie Howard. She smiled and shook the hand he proffered. “Not exactly a pleasure under the circumstances but good to see you, nevertheless. Both of you. I take it that is Laura Jarman?”

“If the Chief Inspector thinks it’s a good idea?”

“Could he stop you?”

“Probably not.” Bunch stepped between the men and steeled herself before pulling the sheet from the head and neck to look down at the dead woman, telling herself that the person was long gone, that these were only earthly remains. The sight of a body was never something she welcomed but something she felt she needed to endure in order to gain a sense of the person that had once been.

Laura’s face was bloodless, her skin the same off-white shade of thin cream. But she would, Bunch decided, have been pale even before death. A dusting of freckles across the girl’s nose and cheeks looked like spatters of tea on white parchment. Her hair was the pale brown of fallen leaves, with just a hint of red. Her eyes were closed but Bunch imagined them as blue, or even violet. Her lips that were once full retained traces of vivid scarlet lipstick but there was no evidence of face powder.

Bunch peeled the sheet back a little further and tried not to flinch at the stronger odour released from beneath the cover. Not a fresh cadaver, she thought. She noted several cuts to the body that were tinged dark with crusted blood, as opposed to the fresher Yshaped post-mortem incision, roughly re-sewn. “Death appears to have been due to stabbing.” She leaned a little closer to examine purple bruising around Laura’s neck and left cheek, dark marks on her arms and ribs, and took note of the deep creases around the midriff. “She was subjected to some considerable violence, poor girl.” 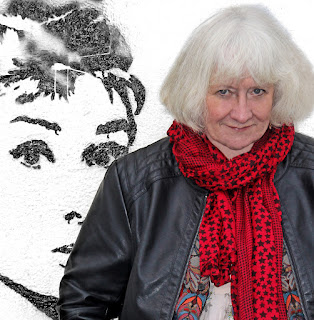 Jan Edwards is the UK author of the Bunch Courtney Investigations - the WW2 crime novel series, which gained her an ‘Arnold Bennett Book Prize’.
She also has 50+ short stories in horror, fantasy, mainstream and crime fiction anthologies, including: Mammoth Book of Folk Horror, Criminal Shorts, The Book of Extraordinary New Sherlock Holmes Stories: and multiple volumes of the MX Books of New Sherlock Holmes Stories.