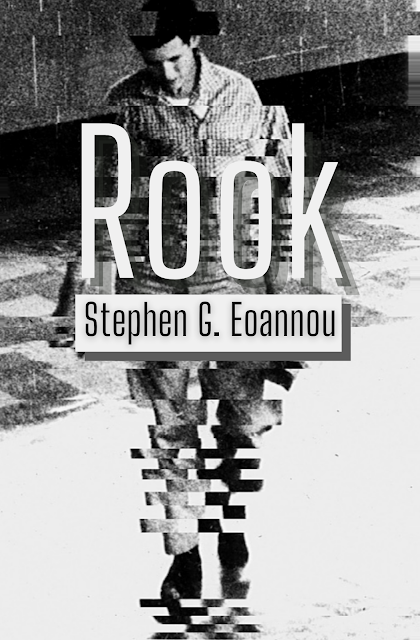 Today it gives the Indie Crime Scene great pleasure to interview Stephen G. Eoannou, whose novel Rook has its debut on June 28.

What does the Rook of the title refer to? And what does it mean to you?

Rook is based on the true story of Al Nussbaum, a bank robbing genius from Buffalo, New York. The title has a double meaning. First, it refers to the chess piece. Al planned his robberies to the finest detail. He loved to think ahead, plan for contingencies, anticipate what the police might do. It’s no surprise that he was an avid chess player. He once said that robbing banks was like chess but with cash prizes. Rook is also slang for swindle or cheat. If you look at his marriage from his wife’s perspective, she was rooked. Lolly had no idea Al was robbing banks. She’s left to wonder if their entire relationship was built on a lie.

The novel is described as historical crime fiction. How important is it to you to stay close to historical fact, and where does the gap between fact and imagination appear?

When researching Al, I had access to a great deal of source material. I obtained his FBI and prison records under the Freedom of Information Act. I read newspaper articles at the Buffalo Central Library about his robberies and arrest. I read Gunshots In Another Room, Charles Kelly’s fine biography of Dan J. Marlowe, Al’s friend and writing mentor. It was easy to weave historical facts throughout the narrative, especially the details of Al’s crimes and his criminal timeline. But this is as much a marriage story, or end of a marriage story, as a crime novel. And that part of the book, imagining the marriage’s aftermath from Lolly’s perspective, is pure imagination.

Who was Al Nussbaum and what made you decide to write a book about him?

On November 4, 2012, The Buffalo News ran the article “The strange, true story of a Buffalo bank robber-turned crime novelist” by Charity Vogel. It was a Sunday and I read the article standing in my kitchen. By the time I was finished, I knew I wanted to write about Al. I thought he was a fascinating combination of contradictions. Plus, he was a Buffalo guy. Rook grew that day from an idea into a novella, and then from a novella into novella trilogy, and finally to a novel. Al also became a writer later in life, writing crime and adventure stories, mysteries, and did some work in television. I’m fascinated by the idea of a writer as hero or anti-hero. That fascination has carried over to Yesteryear, my novel that comes out next year from SFWP. The main character is Fran Striker, the man who created The Lone Ranger.

What about Nussbaum’s wife, Lolly, who is unaware of his exploits at first. How does she fit in to the narrative and what is her point of view?

Rook is as much Lolly’s story as it is Al’s. How do you move forward when you realize the man you married, the father of your child, is not who you thought he was? Or that you chose to ignore what you have always suspected about him? Those two questions fascinated me and drove me to imagine Lolly’s life. These two questions didn’t come to me right away, however. Lolly was hardly in the earlier drafts when I imagined Al’s story as a novella or trio of novellas. It wasn’t until I decided to expand the narrative into a full novel that Lolly appeared. My dear friend and novelist Ashley Warlick was the one who suggested I explore Lolly’s character. As soon as she said that, Lolly appeared. She’d been there all along, waiting for me to find her. Lolly gave me the structure of the novel, the fullness the novellas had been lacking. She gave me  Rook’s gentle, damaged heart. Rook wouldn’t be Rook without her.

Charles Kelly (author of Gunshots in Another Room: The Forgotten Life of Dan J. Marlowe), says of Rook: “Eoannou has dramatized how Nussbaum’s obsession with bank robbery as an art form trapped him and his family in a downward spiral of shame and frustrated hope. Brilliant.” What about Nussbaum’s obsession with bank robbery? How can it be related to the ideal (or delusion) of the American Dream?

Al’s obsession with bank robbery mirrors his obsession with chess. He loved the meticulous planning, anticipating his opponent’s moves, outsmarting everyone involved. But robbing banks provided Al with something that chess didn’t—cash and a tremendous adrenalin rush. Even after winning an award for writing, something he took up while in prison, he’s quoted as saying that writing was fine, but he’d rather be robbing banks. I believe he truly loved it. But you’re correct that crime was part of Al’s bastardized view of capitalism and getting ahead. What did he do with the stolen bank money? He invested it in another venture to make his money grow. What’s more American than that? Except Al’s investment was buying weapons that he then sold to Castro for a greater profit. He had the idea that someday that money could be used to fund legitimate businesses and provide for his family. I found it all terribly interesting and incredibly flawed, just like Al.

Your award-winning short story collection, Muscle Cars, is published by Santa Fe Writers Project (SFWP). What can you tell us about it?

I always describe Muscle Cars as seventeen short stories about men and the bad decisions we make. Loss is the theme that connects the stories, but loss takes many forms--the loss of a job, loved one, a marriage, friends who move away and leave you behind. Those events have taken place prior to the beginning of the stories in Muscle Cars, and my characters are left to deal with the aftermath, usually in an unhealthy manner. Rook is an extension of Muscle Cars in a few ways. Al had already robbed five banks before the novel begins. It was inevitable that the FBI would identify him, that he’d flee, that his marriage would be shattered. In both books, I deal with the aftermath of what occurred before the first page. I think the writing style—economical, gritty—is the same in both books, as well. Loss, of course, is an essential element in Rook just as in Muscle Cars and personified by Lolly and their marriage.

Your next book, Yesteryear, coming in 2023 from SFWP, is based on the life of Lone Ranger creator Fran Striker. Please tell us more!

When people ask me about Yesteryear, I always tell them that I was never a huge Lone Ranger fan, but I’m a huge Fran Striker fan. I don’t know where I learned about Fran, but I remember being shocked to learn that the man who created The Lone Ranger and The Green Hornet was from Buffalo, New York, my hometown. I’m a Buffalo writer. I should know stuff like that. So, I became curious and started researching. It turns out he’d lived in my neighbourhood and had gone to Lafayette High School a few blocks from my house. I never knew that The Lone Ranger made its radio debut in Buffalo on WEBR. And he was a good man, too, taking family in during the Depression and sacrificing for others. He was a Buffalo guy and I wanted to write about him and how he created The Lone Ranger. Yesteryear is different than Muscle Cars and Rook, however. It’s much more playful and funnier with a dash of magical realism. It was fun to write. I hope it’s fun to read.

You won Best Short Screenplay Award at the 36th Starz Denver Film Festival. Do you see yourself writing more screenplays in future? And how does that differ from writing novels?

Writing screenplays is directly opposite of writing novels. In a novel, I can take an entire paragraph to describe a Christmas tree in rich detail. In a screenplay, I might write ‘Corner. Christmas tree’ and that’s it. It’s a different skill, a different discipline. Right now, I’m much more focused on writing novels than screenplays or short stories. But you never know. An idea may form. I might read something. Someone might tell me a story. Those three may gel in my mind and my gut will tell me that a short story or screenplay is the better vehicle for telling that particular story than a novel. That’s the fun part of the creative process. You never know when or how that story or character will find you. That’s one of the ideas I explore in Yesteryear, by the way. The idea of seemingly random events coming together almost magically to create something new and, hopefully, wonderful.

You live and write in your hometown of Buffalo, NY. How important is the nature of the place and its history to you?

The last line of my current bio is, “Eoannou lives and writes in his hometown of Buffalo, New York, the setting and inspiration for much of his work.” That’s a lie. It’s the setting and inspiration of all of my work. The majority of Rook and Yesteryear are set in Buffalo. And those stories in Muscle Cars where the setting is never specified? Yeah, that’s Buffalo, too. I don’t fully understand the connection I have with this physical place and my creativity, but it’s there and it’s real. I enjoy writing about this town, its history, its characters. I’m creating my own fictionalized, romanticized version of this city. This reimagined Buffalo links my books and acts not only as a backdrop but a character in my work. All those places I mention in my stories--The Lafayette Hotel, The Statler Hotel, Al Nussbaum’s house, Fran Striker’s house, Forest Lawn Cemetery, Voelkers, The Kitty Kat (now Eddie Brady’s) are still standing. Okay, Voelkers is about to be torn down, but it’s still standing as of today. I sit in those bars or walk through those places or just park outside and start daydreaming, imagining, and I get inspired. It’s a great town filled with great stories and ghosts who speak to me.

What are you working on now and what are your plans for future books?

I’ve just completed After Pearl, another historical crime novel. I call it my pandemic book because I started writing it right before we were locked down and just finished it earlier this year. It’s set in 1942 and deals with an alcoholic private eye trying to regain his sobriety and his life while trying to solve multiple cases. Like Yesteryear, there’s more humour in it than in Muscle Cars or Rook. We’ll see if After Pearl finds a home. Stay tuned.

What are you reading - or watching - at the moment?

I’ve just started Alex Segura’s new novel Secret Identity. I was drawn to it because I think there are similarities between it and Yesteryear. Both deal with the creative process and forming a new character and a new story. Segura’s protagonist is trying to create a new comic book hero in the 1970’s while Yesteryear focuses on Fran creating a new radio hero in the 1930’s. With both novels, there’s a mystery to solve. I’m anxious to read more of Secret Identity and see how it all plays out. I already know how Yesteryear ends. 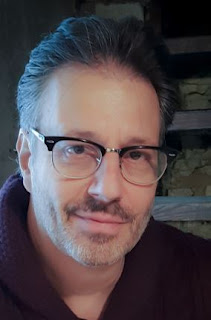 Stephen G. Eoannou holds an MFA (Master of Fine Arts) from Queens University of Charlotte and an MA from Miami University. His award-winning short story collection, Muscle Cars, was published by the Santa Fe Writers Project. He has been awarded an Honor Certificate from The Society of Children's Book Writers and Illustrators, and won the Best Short Screenplay Award at the 36th Starz Denver Film Festival. He lives and writes in his hometown of Buffalo, New York, the setting and inspiration for much of his work. Rook is his first novel.