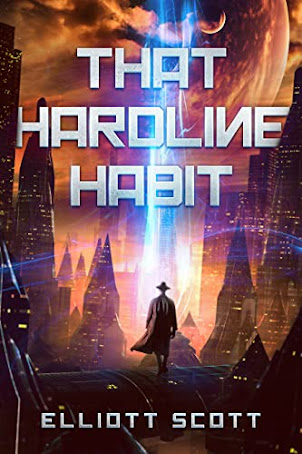 About That Hardline Habit:

"A Sci-Fi Dresden files with a gritty edge! I couldn't put it down."

Felix Lasko always wanted to be a detective, even if it meant working his way up from the bottom of the barrel. Little did he know how deep that barrel would be in the futuristic city Neotopia.

The only client he can find is a Presser—an addict who gets his thrills by flooding his brain with pleasure straight through the wire in his skull. Even if Felix can find the device the man is looking for, getting paid by the junkie is another challenge.

Can he solve the case and get his foot in the door as a detective? Or will he strike out and let his dream slip through his fingers?

As far as highs went, getting a Wire and Button installed was relatively cheap—if you’re talking the cost of Specs spent on the surgery, that is. What it really cost you was the rest of your life. The habit started off with stick-on applicators for a quick hit in the bathroom, and ended up where these feet were.

No living soul could kick that hardline habit. The song its wire sang was just too sweet. And when they finally bit the dust, their thumbs locked down hard in rigor mortis on the controller.

Not even the dead kicked the stuff.

I paused before the door for a moment.

Sand in my lungs, and about to wade through one of the nastiest corners of all of Neotopia. Pretty standard for me, really. If Atlas was the bottom of the barrel, places like this held the roaches and spiders that lurked beneath it. I couldn’t get too high and mighty though, because those roaches and spiders were the only ones listing cases that I could take.

Aldred’s case had gone to the Criticals: Neotopia’s top-end Reality Detectives. They’d turned it down. They were too busy chasing down wild A.I.’s and non-contract consequence murders. Wager your life in Neotopia, and lose, the owner of the contract can legally kill you in any way he likes. No questions asked. Kill someone without a contract—and more importantly, without giving the city a cut of the wager—and the heavy hitters are coming after you.

Then the case made its way through the high-level independent detectives, who’d also turned it down. After that, apparently, it had been fished out of the proverbial trashcan by the smalltime detectives with nothing better to do.

They’d turned it down.

The last comment on the case file read, “Only a fool would take on this case.”

The note went on to say, “Nobody with any self-respect would be caught dead down in Atlas. And you’d be losing Specs trying to get a payment out of a Presser.” Lucky for me, I didn’t have any self-respect. When you’re a week from payday and have eaten only Future Pills for three days, you’re pretty sure you’re running low on it. When you realize your underwear is scheduled to dissolve in thirty minutes and it’s your last pair…

That really closes the book on the matter.

Besides, I already lived in Atlas, so it wasn’t as if I had to sink any lower to reach the bottom of the barrel.

I slept in it every night.

Elliott Scott read Neuromancer when he was fourteen and has been hooked on Science Fiction and Cyberpunk ever since. Then mysteries like The Big Sleep found a permanent home in his brain.

He spends most of his days reading and rambling about the Singularity. When he can’t find anyone to listen to him he writes. Terms of Service is his first full length novel, and he plans to write until the sun explodes or until there is no ink left to print on Earth—whichever comes first.