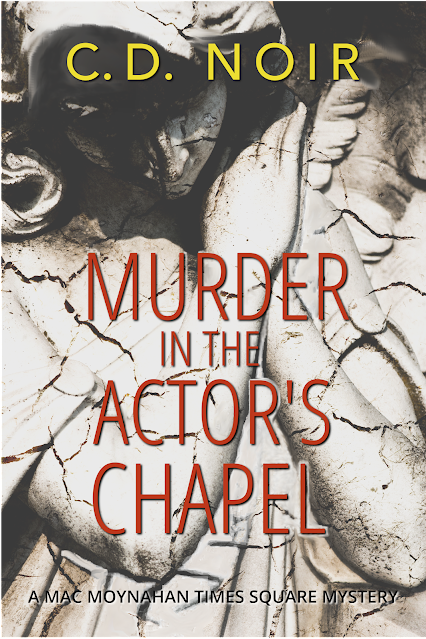 About Murder in the Actor's Chapel:

Fame is fleeting but infamy will haunt you.

A voice from the past breaks into P.I. Mac Moynahan’s pre-dawn workout and drags him back to a world of mortal sin and sacred ritual.

A vintage playbill pinned to the door of a famous church, a bloody corpse staged in a copycat chapel, a priest bound by the seal of the confessional, some slick hacking by his method-acting office manager, and a few yellowed photographs send Mac in search of answers long-buried among the dead.

Broadway legend Leo Albion outlived his fame — but not the one person who hated him enough to track him down and kill him. And as Mac closes in on a motive, if not a suspect, someone is tracking him.

A macabre murder, an elusive killer, a missing motive and a twisted tale of wealth and perversion rival the darkest tragedies of Shakespeare.

"The figure waiting for him just outside the carved wooden doors to the main chapel appeared unnaturally pale — that might have been the thin gray light and the long black cassock. The priest was more substantial than a ghost, but just barely. The outlines of the neo-Gothic building behind him sharpened as the sun rose somewhere over the East River, turning West 49th Street into a picture postcard.

St. Malachy’s sat, peaceful and pristine, on the deserted block, the silent Eugene O’Neill theatre with its bold Book of Mormon marquee facing it across the street. By noon, the block would be humming with tourists, matinee-goers, and a few mid-day mass devotees. But now there wasn’t even the random drunk slumped against a parked car to disturb the isolation.

Something was out of place, though. Mac caught the slight flutter of a piece of paper against the church door as he approached. Then, as the priest moved away from the object he had been shielding, Mac could see what it was.

An ice pick stabbed through yellowed printed paper, impaling it to the wood. Ornate, faded black lettering was scrawled over in violent red writing—the red as shiny as wet blood. Mac could make out the printed Titus Andronicus of an old theater program. Shakespeare. The red slashes across the face of it said “Serpent’s Tooth.” More Shakespeare?

Mac had no allergy to Shakespeare but the sight of the program and its dark message, pinned like some heretical proclamation to the heavy wooden door, hit him with a sudden sense of foreboding. He knew his reaction was illogical. He also knew his gut instincts were what had made him an NYPD hotshot — he was unbeatable at murder. This wasn’t murder though. It was just creepy and odd, and appeared to have unhinged the acting pastor of St. Malachy’s. Noted.

Mac ignored his discomfort and switched into hyper-focus mode, intending to clock every detail of this weird scene and make short order of the explanation for it.  He whipped out his cell phone and snapped a few pictures of the skewered paper, close-ups of the vintage type and the violent red slash of writing. As he finished, a hand shot into view and yanked the ice pick from the door, leaving a hole ringed with splinters in the middle of the carved wood.

“You just destroyed the evidence.”

The priest shrugged, proffering the program to Mac. “I couldn’t leave it there. People will be coming for morning mass. What would they think?”

“Have you called the police?” Mac made no move to touch the program. He took in the diminished stature, the thinning hair, the lined face of a man who had once seemed eternally robust and larger than life to him. We were all that much younger then, he thought, with no clue about all the tough life coming at us."

C.D. Noir, native New Yorker, is addicted to murder mysteries, both writing and reading them. C.D. used to be a people person but gave that up for a reclusive life of imaginary gore, mayhem, gnarly puzzles and the quirky characters who tackle them. Mac Moynahan Times Square mysteries are glimpses of the grit and grime of C.D. Noir’s New York, where the good guys don’t always win, truth doesn’t always lead to justice, and solving crimes usually involves some borderline criminal activity.