Interview with Maerwydd McFarland, publisher of Murder in the Actor's Chapel by C.D. Noir 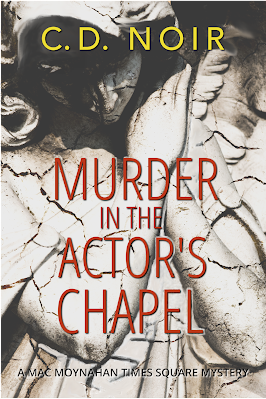 Tell us something about Barefoot Bard Books. What led you to set it up, and what sort of books does it publish?

Independent publishing is really an industry at its inception. The opportunity to set standards, choose genres and formats, collaborate on covers, marketing and even story ideas is more varied than at any time since people took pointed sticks to wet clay. I like the creative nature of that and I wanted to explore ways to break molds and design the whole package, from work ethic to global distribution. It’s a lot to learn, and I’m just at the beginning.

In your bio, you describe yourself as a bard. What does that mean to you?

Nothing to say really. A bard is a storyteller. All the work I’ve ever done is about telling stories, from war reporting to feature editing to political speechwriting. Read Leo Leonni’s Frederick to understand the essential nature of the bard in society. It’s the opposite of a bullsh*t job.

The Mac Moynahan Times Square Mysteries by C.D. Noir is the first series you have published. We featured their new release, Murder in the Actor's Chapel, on January 11 2022. Who is C.D. Noir and what can you tell us about them?

C.D. Noir and I first encountered each other when we both worked on-camera in major market television in a time long ago and far away. We both understood the appeal of the hermitage, the silent slipping away from the daily hustle and bustle. I stayed connected to all that noise as I moved on and away. C.D. eventually opted out, for sanity and serenity. When we ran into each other again in New York, we were both ready to consider a new adventure. It took years to make it happen though. (C.D. does not use pronouns, btw, to avoid all the baggage that comes with them.)

You have published two books in the series so far: Footfall at Follies and Murder in the Actor's Chapel, and there is a third in the pipeline. What sort of reader will enjoy these books?

Hmmm. Tough to set those parameters. Traditional mystery lovers — and readers who like: New York stories, unconventional characters, a glimpse of the visceral edges of violence, psychological motivation and aberration, humor to break things up a bit, an underlying thread of romance (a thread — not an HEA), wildly improbable human beings who are just NYC daily fare if you know where to look, puzzles that have to be unwrapped by wit and stubborn work. I always hesitate to compare one series to a popular author’s work — if you like those books, you’ll love these — because that seems like a reach. But I think the Mac Moynahan Times Square Mysteries have a blend of local color, quirky personalities, unpredictable puzzles and real life situations.

Tell us something about New York PI Mac Moynahan. Where does he come from and what is his special shtick as a detective?

Mac is pretty competitive and he was a wildly successful NYPD homicide detective. When violence tore apart his own life, his grief and rage sent a wrecking ball through what was left of it and landed him off the force. Now he’s a bored, top-notch private investigator with an apartment and a shabby office in Times Square, a cool bartender girlfriend, an insanely improbable office manager, and enough dead bodies strewing his path to give Miss Marple a run for it.

C.D. Noir’s novels are firmly rooted in New York. How important is the role played by that city and its people?

No place like the Big Apple, is there? Mac will never run out of epic murders, weird and wacky eccentrics, evil villains, spectacularly slain victims, and motives to send a penthouse full of shrinks into overdrive. Plus food. Nothing boring about the comestibles in Mac’s neighborhood.

Is it fair to say that there is an element of the supernatural in the novels? The blurb to Murder in the Actor’s Chapel mentions “a world of mortal sin and sacred ritual”.

Ah, likely not — at least no vampire novels, demon angels or sassy witches in the plans. (There’s always Phantom of the Opera though. <g>) “Mortal sin and sacred ritual” will be recognizable to anyone who’s survived the rigors of a Catholic upbringing, which Mac has. The ritual and the ritualistic are never far from each other in the confluence of theatre and homicide.

Another theme that seems to link the narratives is the world of the performing arts - dancers on Broadway in the first book, and the death of “Broadway Legend” Leo Albion in the second. Tell us more about this.

Laura Nyro wrote “There ain’t no mercy now on Broadway.” Broadway and Times Square are inseparable — Times Square is all about the performance, isn’t it? I suspect there will be more deadly performing arts in future books. But C.D. assures me that the whole crazy rest of the environment in and around Times Square is a ripe field for a lot of murder. An upcoming novel we’ve discussed involves the Main Branch of the New York Public Library, for example, which sits squarely on 42nd Street. 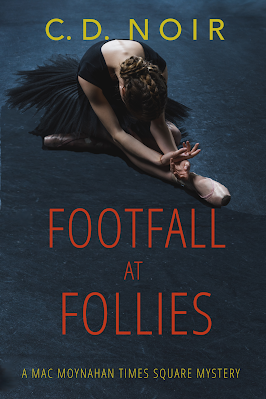 Is Mac Moynahan an Irish American? How important is that background and religion, especially Catholicism, to the stories?

It used to be a cliché that a large number of cops and firefighters in NYC were from Irish-American families, a mostly Catholic bunch. That heritage has a strong influence on the choices and behaviors of succeeding generations. Mac’s background puts him in the way of some misadventures — see Murder in the Actor’s Chapel — and generally colors his world view and his personality. He is not, however, particularly religious.

A line from C.D. Noir’s bio says “Mac Moynahan Times Square mysteries are glimpses of the grit and grime of C.D. Noir’s New York, where the good guys don’t always win, truth may not lead to justice, and solving crimes usually involves some borderline criminal activity.” Often even the grimmest of crime novels involve a resolution or a restoration of justice. What is the difference in these stories?

Truth is the ultimate resolution. That’s the real bottom line to a mystery. But, in real life, justice doesn’t always follow a revelation of guilt. Sometimes the real criminals aren’t the ones who are caught. Enough money or influence can spring you from a lawbreaking trap of your own making. Legal blame can’t always be clearly assigned beyond a shadow of a doubt, even if the truth seems obvious. In some circumstances, exacting justice can lead to a greater injustice. Mac isn’t a cop. He’s very very good but he doesn’t have the power of law enforcement behind him. Bad guys can get away. That’s a New York story.

What are your plans for Barefoot Bard Books? Will you publish more crime, or different genres?

Barefoot Bard Books has always been envisioned as a slow build, so the decision to start with a mystery series and establish that defines us for now. Within the next year or so we’ll be adding the occasional higher-risk stand alone — likely “lit fic" for want of a better description. I’m also keeping in close touch with a really interesting writer of YA fantasy, in case that turns into an opportunity. And C.D. drops the odd hint about a cozy series that I would certainly consider. No rush though. We want to get this right.

The third book in the Mac Moynahan Times Square Mysteries, The Apple from the Tree, is scheduled to appear in March 2022. What can we expect from this latest novel in the series?

More Bessie Latifah madness, more ‘Mac gets roped into a tangled mess he didn’t anticipate,’ more of New York’s particular brand of corruption and the human foibles that distinguish it. A very precocious and endangered little girl. And a few more surprises C.D. will not share until I can see the whole thing from chapter one through The End. March 2022, or thereabouts, is the current release date.

In your bio at Barefoot Bard Books, you mention that you are “a voracious reader, lover of all things language”. What do you love to read?

I will read anything that crosses my vision, any time: ads in the subway, the backs of cereal boxes. But, when I sit down to read, I tend to favor historical mysteries, multi-layered classics, issue- or science-based nonfiction, middle grade books (the best stories!), and brilliant contemporary fiction like Anthony Doerr’s All the Light We Cannot See. Also Tang dynasty poetry and Greek drama. Biographies of amazing women (to counter the overwhelming bias to chronicle the lives and achievements of men that tends to erase women from history).

What is the importance of a small press like Barefoot Bard Books in today’s fast-changing market?

Well the fast-changing market is part of the problem, isn’t it? We are all racing around so frenetically we forget to live (or don’t have the actual time for it). I fell in love with reading before I could even read. Books were my portals into another world. The sheer pleasure of curling up with a good book seems like a luxury any more. Barefoot Bard Books is a kind of pushback to all that. Our deliberately small shop is modeled on the one-of-a-kind handcrafted work of traditional artisans. The purpose is to create and give people satisfying reads — doorways into an alternative reality they can inhabit for a time. And our method is to work intentionally, give the various tasks the time they take, and fold that work into a sane schedule and life that isn’t a recipe for burnout, or a cookie-cutter race to take advantage of the latest trends. That does make us outliers — and it is not a recipe for billionaire bookselling! But I hope it is sustainable and that our products and presentation can maintain a high level of value for our readers.

What effect has the pandemic had on you as a writer and publisher?

The pandemic has layered the usual muzzy-headed fog over the stress and confusion of so much uncertainty. But what is more disruptive is all the dislocation and aborted plans involved. Two major moves were entirely thrown off-track in the past two years due to travel restrictions and other Covid-related factors. That meant months of lost time and serious delays in launching Barefoot Bard Books. On a positive note, I’ve had to refocus and refine my abilities to double down on priorities and power through those days when it seems like a heavy lift to tackle any task essential to publication. Mac is fortunately unaffected as his stories take place around 2013, a time which makes the way he goes about his life perfectly logical.

C.D. Noir, native New Yorker, is addicted to murder mysteries, both writing and reading them. C.D. used to be a people person but gave that up for a reclusive life of imaginary gore, mayhem, gnarly puzzles and the quirky characters who tackle them. Mac Moynahan Times Square mysteries are glimpses of the grit and grime of C.D. Noir’s New York, where the good guys don’t always win, truth doesn’t always lead to justice, and solving crimes usually involves some borderline criminal activity.

The Proprietor and Publisher of Barefoot Bard Books, Maerwydd McFarland, is a voracious reader, lover of all things language, and a genuine bard with a lifetime of writing to her credit. Barefoot Bard Books, birthed in a brownstone on the Upper West Side, currently operates out of an old Victorian pile in bucolic Vermont, just on the edge of the Canadian border. But it is an idea untethered to place, a bookshop that tends to wander, a carefully curated collection of authors who write what they love.

Book by book, we set out on a long barefoot ramble.

Kick your shoes off, and welcome to the journey.