Death under the Perseids (A Havana Mystery, Book 1) by Teresa Dovalpage 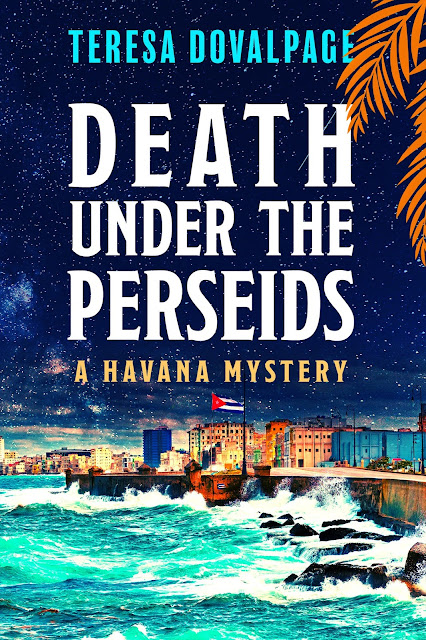 About Death Under the Perseids:

Cuban-born Mercedes Spivey and her American husband, Nolan, win a five-day cruise to Cuba. Although the circumstances surrounding the prize seem a little suspicious to Mercedes, Nolan’s current unemployment and their need to revamp their marriage make the decision a no-brainer. Once aboard, Mercedes is surprised to see two people she met through her ex-boyfriend Lorenzo: former University of Havana professor Selfa Sagarra and down-on-his-luck Spanish writer Javier Jurado. Even stranger: they also received a free cruise.

When Selfa disappears on their first day at sea, Mercedes and Javier begin to wonder if their presence on the cruise is more than a mere coincidence. Worried, Mercedes confides her suspicions to her husband, who—desperate to accept the last-minute invitation he received to
give a lecture at Havana University—convinces her it’s all in her head.

However, when Javier dies under mysterious circumstances after the cruise disembarks in Havana, and Nolan is nowhere to be found, Mercedes wanders through the city, fearing she had been right all along. Will she be next?

The Tears of St. Lorenzo

Las lágrimas de San Lorenzo, that’s what we call them in Spanish. In English, it’s the Perseid meteor shower. I prefer “the tears of Saint Lawrence,” though they remind me of those I shed for my Lorenzo, who died roasted like his namesake.

Do you know the story of Saint Lawrence the martyr? He was a Roman deacon condemned to being burned alive in a gridiron. In the middle of his torment, he said to the executioner, “I’m well done on this side. You can turn me over now.”

What did Lorenzo say while he was being cooked? Did he suffer? Did he ever forgive me?

Part I: Waiting in Port
Chapter One: Surprise Tickets

The cruise ship Narwhal, all twelve decks of her, towered above the terminal building. It had a festive air, with the hull painted white and bright ribbons of red, yellow and green splashed all over. From a distance it looked like a giant tropical bird that had inexplicably landed on water.

August in Miami was, as usual, ninety-four degrees with a devilish mix of heat and humidity that made you want to crawl inside a refrigerator. The Nautilus instructions said to be at Terminal B before noon, but it was well past one and the line to enter the building wasn’t moving. It was worse than being at an airport, por Dios! Then I remembered that we had no right to complain. After all, we had gotten the cruise for free.

I was still scratching my head about the whole thing. It all began when a young woman showed up at Pretty and Pampered, the pet grooming salon where I worked part-time, asking for me. She looked like a teenager, but dressed professionally in a beige suit, and introduced herself as a Nautilus representative. I was getting ready to give a summer cut to a standard poodle when she presented me with an embossed envelope and cooed, “Congratulations, Ms. Spivey! You’ve just won two cruise tickets to Havana!”

I was born and raised in Havana. After marrying Nolan in 2008, I had returned many times to visit my grandmother but never thought of taking a cruise back. And in July 2017, sailing to Cuba was the last thing on my mind. “I’ve won what?” I asked.

The poodle took advantage of my surprise to get away and hide under a chair.

“A couple of tickets!” the girl chirped, perky as could be. “Aboard the Narwhal, our most popular ship! The cruise’s departing on August the tenth.”

Nautilus Cruise Line had started to offer short cruises that included Cuba in their itineraries, she explained. They were carrying out their biggest ever promotional campaign with many giveaways. I was one of the lucky winners. Cool, eh? What that chick didn’t say was how and where I had signed up for the raffle or whatever it was that I had won. 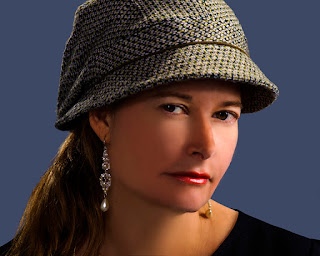 Teresa Dovalpage was born in Havana and now lives in Hobbs, where she is a Spanish and ESL professor at New Mexico Junior College. She has published twelve novels and three collections of short stories.

Her Havana Mystery series published by Soho Crime started with the culinary mystery Death Comes in through the Kitchen (2018), set in Havana and featuring Padrino, a santero-detective. It is loaded with authentic Cuban recipes like arroz con pollo (rice with chicken) and caldosa (a yummy stew). The second mystery, Queen of Bones (2019) includes elements of Santería and, again, food—clearly, the author loves to eat! It was chosen by NBC News as one of the top “10 books from 2019 by and about Latinos.” Both novels are rich in details about life in the island, the kind only an insider can provide. The third is Death of a Telenovela Star (2020) set on a Caribbean cruise and showcasing the dark—sometimes deadly—side of celebrity, as well as the shenanigans that often happen abroad a cruise ship. Upcoming is Death under the Perseids, where the author proves that there’s no such thing as a free cruise.

Teresa also wrote A Girl like Che Guevara (Soho Press, 2004) and Habanera, a Portrait of a Cuban Family (Floricanto Press, 2010).

Once in a while she delves into theater. Her plays La Hija de La Llorona and Hasta que el mortgage nos separe (published in Teatro Latino, 2019) have been staged by Aguijón Theater in Chicago.