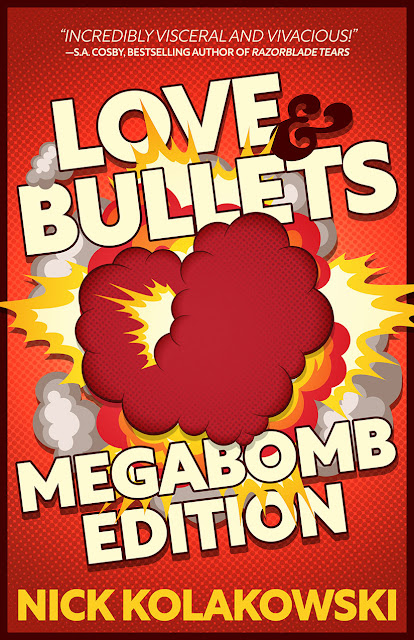 Bill is a conman with a taste for high-end cars, beautiful suits, and top-shelf liquor. But he’s getting tired of the cons he needs to maintain that lifestyle—and he’s sick of the violence that’s sometimes part of the job.

Bill’s girlfriend Fiona doesn’t have a problem with violence, though. She’ll crush anyone who stands in her way—and some days, it seems like the whole world wants a piece of her. She loves Bill, but she’s tired of cleaning up after him.

When Bill decides to “borrow” a couple million from one of New York City’s most vicious gangs and flee for the tropics, it puts their relationship to the test—and while they’re working out their issues, they’ll also need to fend off crooked cops, dimwitted bouncers, and an irate assassin in the midst of the world’s weirdest midlife crisis.

“Love & Bullets” is the story of a 21st century Bonnie & Clyde, a wisecracking duo who’ll blast their way from Brooklyn to Cuba and back in order to stay alive. It’s a wild ride.

Bill awoke, as one sometimes does, dangling upside-down over a pit, ankles wrapped in heavy chains, sweat stinging his eyes, head throbbing like a dying tooth. He heard a dog bark in the night, and the muted roar of what he guessed was the Interstate, but the only light came from a bare yellow bulb bolted to a corrugated-metal shed far below.

Had he ever woken up in a more dangerous position? Bill racked his brain, recalling maybe five years ago when he'd opened his eyes to find both barrels of a 12-gauge shotgun staring back, the trembling weapon brandished by a cuckolded husband. (Only Bill's incredible gift for gab had gotten him out of that situation with his guts lead-free.) Or the time he dozed off behind the wheel and his car plowed into a ditch, the crunch of metal waking him up long enough for the steering wheel to whack him unconscious. He still had the scar on his chin from that one.

Even so, his current situation was a gold-medal contender for Crappiest Ever. His arms, twisted hard behind his back and bound at the wrists, tingled from lack of blood. They had secured the chain around his ankles with a jumbo padlock, hard to pick even if he had the tools, or could bend upwards enough to reach it.

He turned his head away from the bulb, letting his eyes adjust to the dark. Forty feet below, the pit bristled with huge shapes, hard angles; the faint moon glinted silver on the curve of a car windshield. If he fell down there, a piece of rusted-out machinery would turn him into a bit of raw meat on a shish-kabob.

“At least I still have my clothes on,” he muttered into the breeze.

“Not for long,” came a familiar voice, followed by a high-pitched squeal of laughter. The bartender. Of course. Bill shook his head like a Magic 8-Ball, hard, until memories of the recent past floated to the surface. 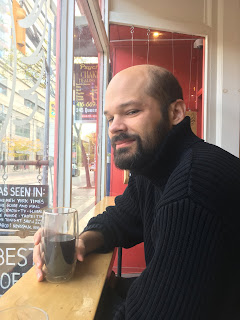 In addition to writing noir novels such as Rattlesnake Rodeo and Boise Longpig Hunting Club (Down & Out Books, 2018), Nick Kolakowski is also the author of nonfiction books such as How to Become an Intellectual (2012, Adams Media, a Simon & Schuster imprint). He lives in New York City, where he also works as a technology journalist.