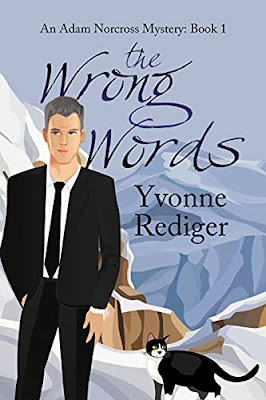 The Wrong Words is your ninth published novel, but the first in a series about Adam Norcross. Tell us about Adam. Who is he and where is he at the start of the novel?

Adam was raised by his author mother with the help of his grandparents on Vancouver Island. He was unusually intelligent as well as athletic. This allowed him to attend top universities and acquire unique contacts in many areas and how he was eventually recruited to work for a little known agency for the Canadian government. Norcross thrives on challenges and the grey world of politics and intrigue. In this first book in the series we only find out about the barest frame work of Norcross' past and his work. Adam is at a low point in his life. His last relative has passed away and he is very depressed. Then his boss, not the most empathetic man, abruptly puts Norcross back to work. We come to realize quickly  Adam has access to information and skills that comes in handy on a murder investigation.

You hint that Adam has unusual powers. What can you tell us about that, without too many spoilers?

Adam has a precognitive ability which gives him flashes of insight into a suspect and whether that person is telling the truth. This ability also allows him to know when a piece of evidence or information is relevant, but not always clear to him how. His ability can come in the form of a feeling or 'rightness'. A puzzle piece dropping into place. The down side, this ability kicks in randomly.

The Wrong Words is a police procedural with a Canadian setting. At the start of the book, Adam is on leave on Vancouver Island, before he is summoned to help investigate the death of a government scientist whose car has plunged into a mountain ravine. How important is the place and the landscape to your writing?

I strive to have the setting feel real to the reader. I like to use real places. If the reader has been there, I hope they will recognize it. The settling should the anchor, so to speak, grounding the reader in time and place.

How did you set about researching the technical side of the story?

I had various meetings with local law enforcement. The Duncan / North Cowichan RCMP were wonderful with sharing their time and procedural information.  It turned out Inspector Chris Bear and I lived in the same small town, a northern Manitoba community. He and his parents lived across the back lane from my husband and I. As to other research, I leverage my local library, the internet, and ruthlessly, my family. I am so fortunate that many of them have a wide range of jobs and experiences I can tap into. My sister, a retired RN, is key with the medical side things, and my brother, a pharmacist. My son-in-law has experience in crash analysis. My husband and son are technical experts in hosts of areas. My daughter, as well as being my chief beta reader, is the source of many life experiences.

You have written cosy mysteries before - is this a cosy mystery and how does it differ from your previous books?

The Adam Norcross mysteries are a bit of a hybrid of police procedural and cozy mystery. Similar to the old black and white series from the 1950's with a dash of the Ann Cleese-style police mysteries (Vera). At least that was where I was starting from, sometimes we go off in a whole new direction.

How important is the supernatural or urban fantasy element?

I treat Adam's ability as an item in his tool-belt. The issue is, he can’t control when and where his ability kicks in. Sometimes it leaves him at a complete loss.

Tell us something about Sergeant Bethany Leith. She is none too happy to have Adam join her investigation. How do you see their relationship developing?

The sergeant is a private individual. She is the 'job'. She also does not cross any line, ever. Leith would never fraternize with a co-worker. That is exactly what Norcross evolves into in The Wrong Words, and her friend. Still, in Book 2 they will be thrown together again. This will begin a slow burn romantic relationship. I believe a couple, above all, must be friends first to develop a strong bond.

The dead scientist, Dr Flete, seems to have numerous enemies and Bethany and Adam have a long list of suspects. How do you go about creating believable villains and keeping the reader guessing?

No one is completely good or bad. I like to take slices of a person's character and play the 'what if' game. What if a large number of people put an average person up on a pedestal? How would that affect them over the course of time? Would they change or hold to their ethics? What is the worst that could happen? What form would those changes take? What would happen to those closest to that person? Positive or negative? We see these situations a lot with public figures.

What can you tell us about Adam’s boss, Walter Shapiro, and the organization he works for?

Walter Shapiro is a bit of a control addict and attempts to keep the government as scandal-free as possible. He is not always successful so he leans on Norcross to do the impossible and sometimes, the unimaginable. Walter is not patient or empathetic. As for the agency, Canada has similar agencies to the American FBI and CIA. SEC and CICS, respectively. In my series there is an agency that functions in the grey areas, which has no public profile or known accountability. These are the people who 'just make it happen' for Shapiro. As the series progress, more is discovered about those who work in the shadows.

You enjoy scuba diving and sailing. Do you find the adventurous aspect helps in your writing, and how?

Absolutely, if I’ve done the thing, it’s easier to write about. I also target shoot with rifle and bow, not well, but getting better. It helps too, that my husband enjoys trying new activities and sports. Bush craft, gardening, hiking, kayaking and karate, along with building a cabin, blacksmithing, and a host of other things. Let's say it's never dull around our house. He also has a wealth of knowledge to draw from when I need an expert's input.

Will there be a sequel to The Wrong Words?

Oh yes, I’m working on the next book now. Book 2 in the series involves archaeologists and an unusual set of finds in the prairies.

Do you have a favourite writing routine and place?

I have an office and in the morning it’s a sunny spot to work. My husband leaves me there until noon each weekday. I like to get at least a thousand words written each day.

What were your favourite writers growing up and were there any special influences?

The first mystery books I read were Eileen Hill's Robin Kane series. I loved them and went looking for more. I read all the Sir Arthur Conan Doyle Sherlock Holmes stories. Eventually became hooked on the older TV show with Basil Rathbone and Nigel Bruce. All my books contain a mystery of some sort. I’ve always been a puzzle solver. It came in handy in my former career in information technology.

What contemporary authors do you enjoy? 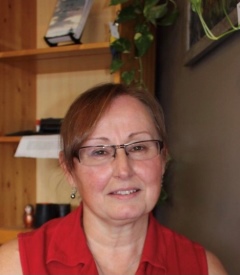 Yvonne Rediger was born in Saskatchewan, lived and worked in northern Manitoba, Alberta, New Brunswick, and Vancouver Island, British Columbia. She currently writes from her home in rural Saskatchewan. Yvonne has been writing since she was in her teens. Her favourite genres are Mystery, Urban Fantasy, Paranormal, and Romance. Each with a bit of humour.

She is a member of the Saskatchewan Writers Guild, Saskatchewan Romance Writers, and International Thrill Writers. She is married to her scuba diving buddy who is also her sailboat captain. She has two children.