Interview with Kathleen Kaska, author of Murder at the Galvez (A Sydney Lockhart Mystery) 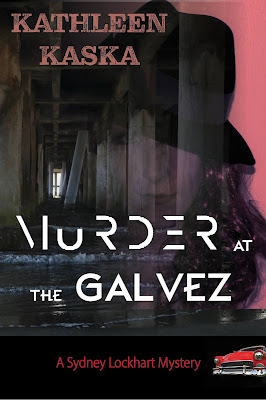 Today it gives the Indie Crime Scene great pleasure to interview Kathleen Kaska, whose latest novel Murder at the Galvez was our featured new release on October 15.

At the start of the book, Sydney Lockhart is a journalist returning to Galveston Texas to cover an important conference at the Galvez Hotel. Tell us something about Sydney and her connection with Galveston.

Sydney is from Houston, Texas which is just a bridge away from Galveston Island. Her grandparents lived there, and her parents retired there. I chose Galveston because I have a strong connection to the island. My parents used to take my sisters and me on vacation to the beach when we were little. My husband and his family are from Galveston. The island and the Galvez Hotel have a colorful, sordid history that is ripe for telling stories. I like to think of Galveston as being a smaller version of New Orleans. It has the decadent, anything-goes same feel.

The series is set in the 1950s. Why did you choose that era and what constraints and freedoms does it give you as a writer?

I chose this decade for two reasons: I grew up in the 50s and have fond memories of the fashion, music, movies, and general lifestyle. Also, it was a time when, after WWII, the American Dream was at everyone’s grasp. The country’s forecast was bright and encouraging, especially for young women who planned to claim their independence and make their mark on the world. I wanted Sydney to be ahead of her time. Instead of working in a field typical to most women of that era: Girl Friday, secretary, or nurse, I planned for her to delve into a man’s world where she would have to struggle and fight to establish herself. Sydney starts out as a reporter. With the murders she’s solved, it was a natural progression to become private detective, especially after the incidents in Murder at the Galvez.

How do you go about researching the era, and how much does your acquaintance with the places described help?

This is the fun part. I get to stay at these hotels. My husband and I travel a lot, and historic hotels are our lodging choice. I’ve actually spent two months at the Arlington Hotel in Hot Spring, Arkansas—setting of Murder at the Arlington—during two different years. All told, we’ve probably accumulated six months there. Same with the Luther Hotel on the Texas coast, the setting for Murder at the Luther. We quickly became part of the Luther family because of our repeated stays.

When I stay at these hotels, I conduct my research. The hotel staff has a wealth of stories to tell. I also check out the old newspapers, visit the libraries, and talk to the locals. When they find out I’m writing a book, they are often eager to part with juicy bits of gossip.

How difficult, and different, were things for a young woman trying to live independently in the 1950s?

Most young women were expected to get married and have families. In Sydney’s case, her mother tried to marry her off right after high school. However, she had no desire to live that domestic life. So with encouragement from her liberal-minded father, Sydney left home to attend the University of Texas in Austin. But being a single woman in the 50s meant struggling to accomplished the simplest things, like checking into a hotel alone.

Historical events form part of the backdrop to the novels. How does Sydney’s family fit into these events and what was the significance of her grandfather’s death eighteen years before?

I always try to find some actual event that occurred during the time in which I’m writing the story, and weave it into the plot. In Murder at the Galvez, the city of Galveston was planning to develop an area called Pelican Island for commercial use. It became a heated controversy at the time. I had great fun using the project as a foundation for the plot. Since Sydney’s parents live on the island, it was only natural to include them. The Lockharts are not the sort of warm and fuzzy family one might except. They are high-drama and have “issues.” This makes for a great subplot that runs through the series.

Sydney finds herself investigating a web of crime, assisted and sometimes hindered by her detective boyfriend Ralph Dixon and her cousins Ruth and Marcela. Tell us something about these characters and how their relationships with Sydney change over the series.

Dixon often comes to the rescue whether Sydney thinks she needs it or not. He does his best to respect her need to be independent, but being a man in the 1950s, he can’t help but be nearby in case a rescue is necessary. Ralph Dixon showed up in the first book. He was a detective with the Hot Springs Police Department who suspected Sydney of murdering a hotel employee. Despite the conflict, it was lust at first sight. It was only natural for the two of them to become partners in crime and romance.

Ruth and Marcella are step-sisters. No one in the family knew Marcella existed until she showed up at the Luther Hotel. She is the illegitimate daughter of Ruth’s father and his mistress. Marcella was welcomed into the family with open arms, except for Ruth, who had become used to being the only child and a spoiled one at that. Over time Ruth has learned to tolerate her sister but will never admit that she sort of likes Marcella. This results in some humorous exchanges between the two.

Without giving too much away, it sounds as if Sydney’s family, particularly her father, are implicated in the mystery. Tell us more.

Sydney and her father, George Lockhart, have always been close. She turns to him whenever she’s troubled and trusts him implicitly. But when Sydney realizes that the unsolved murder of her grandfather is related to the current murders at the Galvez, she starts nosing into the past. Her father becomes secretive, and for the first time in her life, Sydney learns that her father and grandfather have a dark side, which causes her world to unravel.

Sydney seems to have a fraught relationship with her family, particularly her mother. How does that develop?

It’s not unusual for teenage girls to be at odds with their mothers, but Sydney never grew out of this phase, and as a result, they don’t agree on anything. Her mother, Mary Lou, is a drama queen who tries to run Sydney’s life, causing Sydney to avoid Mary Lou at all costs. In Murder at the Galvez, avoiding her mother is challenging since Sydney’s involved in murders just a few blocks from her parents’ home.

You are clearly a great fan of Sherlock Holmes and have written two books of Mystery Trivia about Holmes and Alfred Hitchcock, as well as a short story in the Holmes canon. How has this affected your writing and your love for mystery and thrillers?

There are actually three trivia books featuring Holmes, Hitchcock, and Agatha Christie. These were my first published books, allowing me to get my foot in the publishing door. Studying the works of Conan Doyle, Hitchcock, and Christie laid the foundation for me to start writing fiction.

Writing the Holmes books led to me establishing a local Sherlock Holmes society, The Dogs in the Nighttime, which is a scion of the Baker Street Irregulars. We’ve met regularly for the past ten years. I was also invited to contribute a Holmes pastiche for an anthology called Sherlock Holmes of Baking Street. Every contribution involved Holmes and an element of baking. My story, The Adventure at Old Basingstoke, involved Holmes baking scones in order to solve the mystery. Also included in the anthology is my special scone recipe. I’m about to make a bold statement here, especially to your English readers. My scones are the best!

A prolific writer of fiction and non-fiction, you have also written the Kate Caraway series, described as animal rights mysteries. Can you tell us something about those and how Kate differs from Sydney?

Kate Caraway and Sydney Lockhart are both strong, independent women. The Kate Caraway books take place in current time and contain an element of suspense, while the Sydney Lockhart mysteries are light-hearted and humorous. Writing two different series, is a nice balance for me; humor one day and suspense the next.

Absolutely. Righting wrongs and fighting for the underdog are themes in my writing. Righting wrongs go hand-in-hand in writing mysteries, specially the Lockhart mysteries where Sydney is always a suspect. And, of course, Kate Caraway is kicking butt in the animal-rights world.

The Man Who Saved the Whooping Crane: The Robert Porter Allen Story is a true mystery that involves saving an endangered species. In the early 1940s, there were only fifteen wild whooping cranes left. If their nesting site could not be found, the birds were doomed. It’s a race-against-time story. I like to describe Bob Allen as a cross between John J. Audubon and Indiana Jones. He was dedicated to saving birds, but I think he thrived on the element of danger.

What other crime writers do you love, apart from Conan Doyle?

Janet Evanovich and Carl Hiaasen were the inspiration behind writing my Sydney Lockhart series. I love the humor and quirky characters. It makes writing so much fun. I also read the tried-and-true, Dashiell Hammett, Raymond Chandler, Elizabeth Peters, Martha Grimes, Ann Perry, and Dick Francis. Some of the newer authors I read are Robert Galbraith (aka J.K. Rowling), Spencer Quinn, and Lisa Black. I’m always looking for new mysteries. Any suggestions? 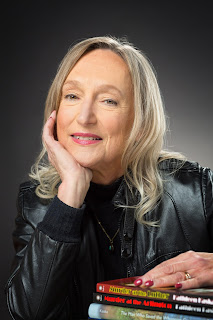 Kathleen Kaska is the author of The Sherlock Holmes Quiz Book, which has been updated and reissued by Rowman & Littlefield Publishing Group and released on November 1, 2020. She is the founder of The Dogs in the Nighttime, the Sherlock Holmes Society of Anacortes, Washington, a scion of The Baker Street Irregulars.

Kathleen is the author of two awarding-winning mystery series: the Sydney Lockhart Mystery Series set in the 1950s and the Classic Triviography Mystery Series. She also writes the Kate Caraway animal-rights series.

When she is not writing, she spends much of her time with her husband traveling the back roads and byways around the country, looking for new venues for her mysteries and bird watching along the Texas coast and beyond. Her passion for birds led to the publication The Man Who Saved the Whooping Crane: The Robert Porter Allen Story (University Press of Florida).

Kathleen was the writer, editor marketing director for Cave Art Press. Her collection of blog posts was released in August 2017 under the title, Do You Have a Catharsis Handy? Five-Minute Writing Tips. Catharsis was the winner of the Chanticleer International Book Award in the non-fiction Instruction and Insights category.

Visit her at : www.kathleenkaska.com You can also reach her at: https://metaphorwritingcoach.com  where she coaches new and emerging writers and helps them discover their unique voices. With sensitivity and passion, Kathleen guides her clients as they learn the craft of writing and the art of storytelling.