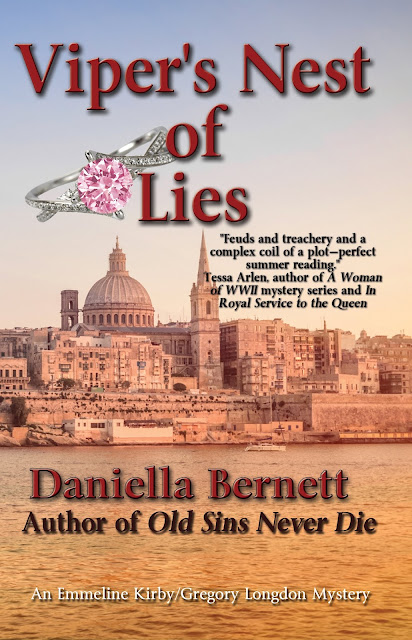 About Viper's Nest of Lies:

The discovery of a blood-encrusted stiletto knife in journalist Emmeline Kirby’s bag at Heathrow Airport sets in motion a chain of events that ensnares everyone she holds dear. The body of Sebastian Jardine is soon found in the boot of Superintendent Oliver Burnell’s car, leading to accusations that he and Emmeline conspired to commit murder. Desperate to clear their names, she turns to Philip Acheson of the Foreign Office for help. But when two Special Branch officers arrive to arrest him, he is forced to go on the run.

Gregory Longdon, Emmeline’s husband and a jewel thief/insurance investigator with ties to the criminal classes and MI5, is the only man Philip can trust. Gregory is on his own quest to prove Emmeline’s innocence in a game that makes no sense. Jardine was no stranger. His old friend was a former Interpol agent, who soured on the law and succumbed to baser instincts. The real problem is Jardine died five years earlier. A fancy pink diamond with a murky provenance that men are willing to kill to possess holds the key to the truth. From London to Malta, Emmeline and Gregory are drawn into a web of corruption and revenge. Will they forfeit their lives for justice?

Gregory grabbed their bags off the carousel in Terminal 5 at Heathrow Airport. “Let’s go home,” he said as he pressed a kiss against Emmeline’s dark curls.

It had been a lovely few days in Edinburgh. They had done their best to put that harrowing business up in Tobermory with Noel Rallis, Lord and Lady Starrett, and the Russian defector behind them. But it was definitely time for them to go home.

Home. The word had an alluring cachet. A place where they could settle into married life, at last. They were still newlyweds. The wedding had been just shy of three weeks ago. A heady time for any couple. Only fate had a wicked streak and forced them to cut their honeymoon short. Gregory sighed inwardly at the memory that had set their last imbroglio in motion. What other couple on their honeymoon would overhear a man attempting to hire an international assassin? Was it an ominous omen about their marriage? He certainly hoped not. Couldn’t the world simply leave them alone to get on with their life in peace?

He tried to shake off these morose thoughts as they passed the WHSmith bookstore and headed toward the exit to catch a taxi to Holland Park.

A security officer with a shadow of gray stubble spreading across his cheeks and a gleaming bald head stopped them. “Miss, would you mind stepping over there?” he asked politely as he indicated with his chin a table about hundred feet away, where two of his colleagues were standing. “We are conducting random checks.”

Gregory’s mobile started to ring. He drew it out of his jacket pocket. “I’ll join you in a minute, darling.” He gave her a wink.

She nodded and followed the officer.

“Hello,” he said as he watched Emmeline place her bag on the table.

“Sorry, I couldn’t make your wedding, Longdon, but then I wasn’t invited.”

Gregory froze. Nerveless fingers pressed the mobile closer to his ear. It was a voice he hoped he would never hear again. “Swanbeck,” he hissed.

“I thought I’d send a wedding gift anyway. I hope you enjoy it. Give my love to Emmeline.”

The connection was severed.

Gregory’s gaze slithered over to Emmeline.

“Did you pack your bag yourself?” the officer asked her, as he searched through it.

“Yes,” she replied with a smile.

He stiffened and straightened up. “Then how do you explain this?”

Between his thumb and forefinger, he held a stiletto knife with a brown crust of dried blood.

Emmeline’s eyes bulged wide. A cold, suffocating dread clutched at her chest, squeezing the air from her lungs.

She licked her lips with the tip of her tongue. Her mouth was parched. Even sand-driven winds couldn’t make the Sahara this dry, she reasoned illogically.

“I—I…” But her brain refused to string any words together that would be deemed a suitable and coherent response.

There were no words for this.

Her gaze flickered nervously between the two officers, before returning to the offending weapon with its sinister, telltale trace of violence. She gaped at it.

A scream was trapped in her throat. This was all a terrible mistake. 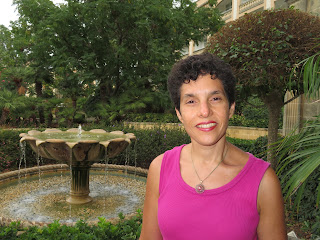