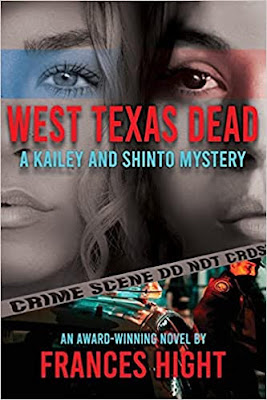 Today it gives the Indie Crime Scene great pleasure to interview Frances Hight, whose novel West Texas Dead was published on May 24, 2021.

West Texas Dead is your first published crime novel, but you have had numerous successes with your short fiction. Can you tell us about that?

My first short story to be published was in Florida Writers Association anthology Collection almost a decade ago. The thrill of seeing my work in print was something I’m sure all writers can identify with. The thrill never dims. My stories are generally about interesting characters in difficult situations. And that seems to work for me. I have had almost a dozen short stories published in FWA anthologies and one, Castle of Blood, included in an anthology Fairy Tales, The Sequel.

Am I right that the book won the 2018 Royal Palm Literary Award for an unpublished novel-length book in the Crime genre under its first title, Texas Dry Heat? What happened after the book won the award and how did you bring it to publication?

My original title for West Texas Dead was “The Tomato” when it was awarded Bronze in the RPLA competition for unpublished novel. After the novel won in RPLA, I kept working on it, refining the story line and editing until I felt it was ready to be published. I researched cover designers, formatted the inside text on my own, and used Amazon KDP to “build the book.” The excitement of seeing a short story published is good. The thrill of holding your first published novel in your hand is something else again.

The story concerns two old school friends who have known each other since forever and come to work together as cops. Who are Kailey Carmichael and Shinto Elliot?

Kailey Carmichael and Shinto Elliot are two characters I modeled after several people I’ve known over the years. I consciously wanted to explore a dynamic between two extremely close friends who were as different as chalk and cheese. Kailey embodies some of the heartbreak I’ve experienced in my life. Shinto is everything I’d like to be, taking life on her own terms, loud and proud, and if you don’t like it you can----.

How do you research the life of a police officer, particularly a woman?

I was able to draw from experiences of family and friends who were in law enforcement. I have a dear friend who is currently a nurse at Marin County Jail and he is a go-to source for any and all questions I may have about jail environments.

Is this story as much about friendship as a police procedural?

West Texas Dead is about both relationships and police procedural. The crime and law enforcement aspects of the book are excellent ways to maintain tensions throughout. Character flaws and triumphs/tragedies are there to give my story heart and keep us rooting for the “good guys.”

Cagney and Lacey was a series that I loved. Was that unique and very different pairing in your mind as you wrote?

I must admit that I had Cagney and Lacey, and Rizzoli and Isles top of mind while I was writing and plotting the narrative of my book. I wanted it fast-paced and fun to read. “Buddy cop” movies are also fertile examples for ways to inject humor and heart into the messy business of law enforcement.

Often in crime there is a solitary detective (a man) with a sidekick. This is not the same - Kailey and Shinto are partners. How does that affect the story?

Kailey and Shinto are separate but equal by design. Qualities in both characters have equal importance throughout the novel. Neither one is superior to the other. My hope is that readers will find something they can identify with in one or even both characters.

Kailey has survived a terrible trauma - the death of a child at the hands of her abusive husband. How does this experience shape her as a woman and a cop?

Kailey has a very short fuse when it comes to men that reflect the abusive tendencies of her husband.

Shinto has a very different background. She served as a soldier in Afghanistan. As a war veteran, does she see things differently to Kailey?

Shinto has a very “black and white” view of the world with no room for gray. She is quick to judge and has zero patience. Law is king, evidence is truth, and softy touchy-feely crap has no place in her world.

The Amazon blurb says: “Shinto shatters every gay stereotype as an ex-Army MP with an edge.” Tell us more about this, and how it affects the dynamic between the two characters.

Shinto’s experiences in the army over in Afghanistan rocked her and built callouses over what might have been her softer sides. A family she befriended over there, young girl and mother, were murdered by the fundamentalist father/husband of the house and she carries that burden. She is not a big fan of men because of it. Kailey knows Shinto better than any other person on earth. She knows when and how far Shinto can be pushed.

The mystery begins with the murder of a retired professor. There’s an obvious suspect, but the detectives learn to look deeper. What challenges do they face?

Shinto’s love for and reliance on evidence skews her perspective on the professor’s murder, the frame is pretty convincing. Kailey is more apt to place importance on how she reads people, and the “obvious suspect” in the professor’s murder simple does not “feel right” to her. She trusts her gut more than the evidence in this case. The problems are one: the evidence, two: a police department looking for a quick resolution, three: the prime suspect himself is flawed enough to keep sabotaging himself in the eyes of the law.

How important is the Midland, Texas setting and how does it differ from other places where you have lived?

I lived in Midland during the “doo-dah days” of big oil and that is where I had to bury my daughter and later my husband. Midland is flat, hot, dry, and full of gracious, wonderful people. Instead of trees, the horizon is more apt to be broken by oil derricks.

This is the first book in the series. What can fans of Kailey and Shinto expect?

The next book in the series will expand upon Kailey’s forensic interests, Shinto’s Indian heritage—including her extremely colorful grandmother, and the love-lives of both women will get a bit more play.

On your web-page, you talk about writing as follows: “My particular journey has had its share of hills and valleys, same as most writers. The only differences are the specifics that make them my own.” Can you talk a bit more about the specifics of your writing journey?

All writers’ journeys are at once similar and very different. The one constant for us all is the act of writing. I am what we call “a pantser.” I do not rely on outlines to get me through the story, rather, I travel through the story in much the same way as a reader might. I am often surprised by the paths my stories and my characters take.

What do you like to read and are there any important influences?

My reading covers all genres. I generally read three or four novels a week. Some favorite authors include Janet Evanovich, Sue Grafton, and Sara Paretsky. 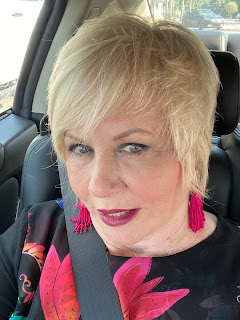 Frances Hight is a third generation California native. She has lived in Oklahoma, Texas and currently resides in Florida. She is a multiple award-winning mystery/thriller writer with ties to critique groups in San Francisco and Orlando. She loves cooking, taking classes when she travels and posting photos of her successes and failures on social media.