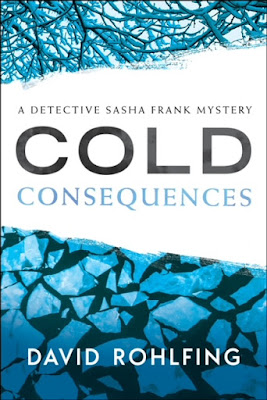 It gives the Speculative Fiction Showcase great pleasure to interview David Rohlfing, whose novel Cold Consequences we featured on July 26.

Your first novel, Deliberate Duplicity, introduced us to Detective Sasha Frank. Can you tell us something about Sasha and what drives him? What is the significance of his name?

I've written Sasha's character as one who relentlessly works to deliver justice for the victims of the murders he investigates. I hope readers see both he and his partner as the type of detectives they'd expect would provide justice for them if, God forbid, they or a family member is a victim of a heinous crime.

Years ago, my wife and I discussed getting a dog, either an English Bulldog or a German Shepard. Both dog breeds represent strength and tenacity. The names we talked about most often were Sasha and Frank, hence the genesis of my senior detective. Sasha's namesake was his fictional maternal grandfather, a World War II Russian war hero who fought and survived the Battle of Berlin, which was no small feat.

Cold Consequences is the prequel to Deliberate Duplicity. What made you decide to write about Sasha's earlier career next?

Readers of the first book in the Detective Sasha Frank Mystery series would have seen a reference to a few of the characters in Cold Consequences in the ninth chapter of Deliberate Duplicity. In addition, there are many references to past events in the first book, and I thought writing the second book as a prequel would work well for the series.

The novel is a police procedural and your protagonist is a professional, not an amateur sleuth. How much difference does that make in terms of research and scope for creativity?

With the plethora of books, television shows, and movies that feature police and crime scene investigators that we watch over the years, I think many of us see ourselves as amateur sleuths. I certainly research some events in the book for accuracy, but mostly I write from how I would approach investigating a crime scene. In addition, I like to understand details in my personal life, so I tend to write that way as well.

In Cold Consequences, the murder victim is the granddaughter of a powerful judge. But the investigation seems to bring forth further murders. How does Sasha set about solving the mystery with the added problem of the victim's identity?

Influential people shouldn't be able to jump to the front of the line. Too often, the influential people who live in small towns and cities alike tend to use up more than their fair share of other people's time and energy. After the murder of Ashley Cummins, criminals who prey on those suffering from opioid addictions also are being killed, and Sasha exerts the same doggedness trying to solve their murders. I believe these murders add an extra level of complexity for Sasha to deal with while investigating Ashley's murder. I hope readers do too.

How do you set about creating the puzzle, the enigma, that the detective has to solve?

First, I don't follow those who advise that to write a book; you have to thoroughly outline the story being told and develop all the characters before starting. That doesn't work for me. Instead, I sit down and start writing with only a couple of characters and the story's basic premise in my mind. Then I add, delete and often reshuffle characters and chapters as I write. For me, by following this format, I can make the storyline more complex, which is the type of murder mystery I like to read. I want readers to be thinking about how they'd approach the investigation and discover who they think the antagonist is.

In Deliberate Duplicity, dead bodies are found at different points along the Constitution Trail in Bloomington-Normal, Illinois. Tell us more about the trail and what inspired you to feature it in that book.

Since the book series features a detective from Bloomington, Illinois, I wanted to use a prominent location to discover the victims. Additionally, the killer glues each victim's eyes wide open, suggesting that everyone, even the dead, can see the message sent from their deluded mind. Therefore, posing each victim on the Constitution Trail seemed appropriate for the killer to gain the attention of whom the message was intended.

Bloomington-Normal is an unusual setting - what made you choose that place?

Many books featuring police detectives occur in large metropolitan areas of either of the United States coasts. So I thought it would be interesting to write about a detective in a small Midwestern city. Although I've lived most of my life in big cities, I grew up and currently live in Central Illinois, so I thought the Twin Cities location was perfect.

To quote the blurb "each body is posed on the ground with the eyes manipulated so they remain wide open." How difficult is it to get inside the mind of a killer and to imagine the detective's antagonist?

That's a good question. Family and friends certainly look at me differently after they've read my books, with each wondering why they never saw the darkness in me that comes out in my books. Thankfully I don't have any life experiences along the lines of those that I write about, but I think that people I've worked with over the years would say I have a creative mind. Instead of creating a sales or marketing idea to be implemented in a business that I ran, I've just turned that creative mind down a different path, albeit it a dark one. I don't seem to have any problem coming up with innovative ways to kill off one of my characters. I'm currently writing the third book in the series, and I can assure you that I continue down that same path.

In a detective story, is the murderer - the villain - as important as the hero?

Absolutely. Without the villain, our hero doesn't need to exist. Making the antagonist a worthy opponent who is inherently evil gives our protagonist Sasha Frank someone to battle while finding justice for the villain's victims. The villain certainly isn't admired as the senior detective should be lauded for bringing the guilty to justice for crimes they commit.

How do you set out to write a new novel? Do you plan every stage meticulously?

As I mentioned earlier, I don't set out with a plan. Instead, I try to meticulously write each chapter to ensure that essential details help lead the reader towards hopefully assisting Sasha as he unravels the evidence in the case. As a reader, that is what I like in a book, especially in a murder mystery.

What advice would you give to aspiring authors setting out to write a book?

Many years ago, I was asked to write a business blog in the industry where I worked. Up to that point, I had never written anything beyond business plans. I discovered that I found I really enjoyed writing. A friend suggested that I write a book on my business experiences, and I quickly found that writing about oneself isn't easy or certainly not enjoyable. It wasn't for me. Instead, I started thinking about how much fun it would be to write a murder mystery. I'm not sure I'm the best person to offer advice, but the one thing I know is you need someone who is smart and whom you trust to read what you've written. That person must be someone who will give you an objective, unvarnished opinion of what you've written, and for me, that is my wife.

The only additional advice I could give is almost always less is more. Try to write the fewest number of words possible to tell your story. I've learned from writing "Deliberate Duplicity" to "Cold Consequences" and now the third book in the series. Less is more.

With two books finished, what are you planning for Sasha Frank? Will the series continue?

If you were driving from the East Coast to the West Coast of the United States, I think I'm about to Nashville in writing the third novel. I wrote the first two books during the winter months as I like to be outdoors as much as possible during the summer since I live in Central Illinois. The premise of the third book is about someone who is looking to replace a lost love and finding flaws in almost everyone. Of course, that's not unusual in real life, but how the person looking for love deals with disappointment is what leads Senior Detective Sasha Frank to investigate a murder.

What writers have influenced you and whose work do you enjoy?

I really like the fictional characters of Harry Bosch and Jack Reacher, so I enjoy reading the authors Michael Connelly and Lee Child. I think they have influenced me the most. There are other authors that I read, of course, but those two stand out.

How important is the sense of place in your work?

It's essential to the book and the main character. The fictional Sasha was born and raised in Springfield and graduated from a college in Bloomington, where he also joined the police force. If you grew up in a small town or city in Central Illinois, you would embody a certain mindset that Sasha Frank personifies. Likewise, the characteristics of many raised here would include believing that hard work, modesty in all things you did, caring and consideration for others, being trustworthy and honest were all instilled from childhood. Everyone knows everyone in a small town, making it essential to be viewed as a good person by the town's residents. There is no anonymity living in a small town. Your parents worked there, and most of your relatives lived there or nearby. Almost everything you did was done in a fishbowl and seen by those in your family who you would never want to embarrass by doing something bad that might reflect on them. I'm not suggesting that people living elsewhere don't have these characteristics, but living in a small town accentuates the need to lead your life that way and exhibit those qualities in your everyday life. That's who Sasha Frank is, and I think it is apparent in how he goes about being a detective. 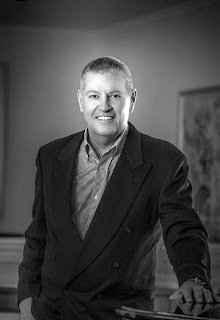 After a long career in business that gave him the opportunity to travel to all but one continent and countless countries around the globe, David decided to write his first novel, “Deliberate Duplicity.” He lives in Illinois with his wife. When he’s not writing, he spends as much time as possible with his wife and family and working on his golf game. “Cold Consequences” is the second book in the Detective Sasha Frank Series. To learn more about David’s work, please visit www.davidrohlfing.com.