Tales From A Scarygirl Two: Darkly Sinister (Tales From a Scarygirl, Book 2) by Marie Anne Cope 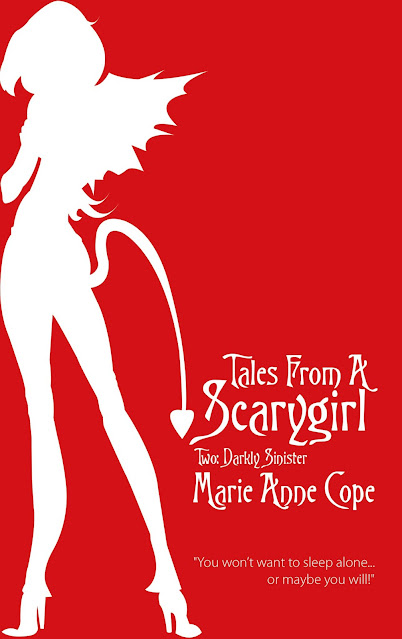 About Tales From a Scarygirl Two: Darkly Sinister:

THEY EVEN KISS YOUR KIDS GOODNIGHT.

Are you SURE you know your friends and family as well as you think you do?

These Darkly Sinister tales will challenge your view of those closest to you as they delve into the minds of a selection of murderers; all calm and composed on the outside, but harbouring depths of depravity within.

In Darkly Sinister, volume two of Tales From A Scarygirl, Marie Anne Cope takes you on a journey to discover the wickedness of the human psyche and how, when it comes to being scared, you should look at those close by.

If you enjoy spine tingling short stories that leave you unsettled and feeling uneasy, Marie Anne Cope’s latest collection, encompassing the darkness of Stephen King and the visceral gore of Jack Ketchum, is the very reason you will sleep with the lights on.

Tales From A Scarygirl Two: Darkly Sinister – Step into the minds of the killers amongst us.

She was the more outgoing, wanting to show off to anyone and everyone, wanting to perform even then. He left home at sixteen, following his mother’s death. He tried to keep in touch with his father, but it was a one-sided exercise. Ever since, whenever he read the papers or watched the news, he saw her face. Eventually, he stopped.

‘Hi, sweetie,’ she said, air-kissing him as he came in, shaking her hands to dry her gleaming red talons.

‘Angela,’ he stated, refusing to acknowledge her stage name; his way of keeping her down.

Not wanting to stay any longer than he had to, he asked, ‘Why am I here? And for God’s sake, put some clothes on. You look like a whore!’ He smirked as he watched her footsteps falter. Hit you where it hurts, have I, sweetie?

‘I-I-I’ve got some bad news,’ she said, pulling her robe around her and hugging herself, tears sliding down her freckled face. ‘Daddy died.’

He flinched at her words. ‘When?’

‘A couple of weeks ago,’ she replied, her voice wavering.

‘What?! He died a fortnight ago, and you’ve only just decided to tell me?’

‘W-w-well, I-I-I was upset, and I-I-I’ve been busy with the funeral and the will and everything.’ She fell silent.

He strode forward and grabbed her by the throat, shoving her up against the nearest wall. Lifting her off the floor, he looked her in the eyes. ‘You buried my father without even telling me he was dead!’ he said through gritted teeth, his cheeks tinged red.

She inclined her head as best she could, her jade eyes wide, tears flowing down her cheeks. ‘I-I-I thought—’

‘No! You didn’t think, that’s your problem, you never think!’ He hurled her across the room. ‘You’re a selfish bitch, you always have been!’ he ranted, advancing on her. ‘You only think of yourself. “Little Ruby Red”, the movie star, the success story. Daddy’s little baby!’ He spat at her as he towered over her. ‘Well, you’ve gone too far this time, Ruby, much too far. It’s time to teach you a lesson!’

With that, he grabbed her by her famous hair and dragged her into the bathroom; Ruby fighting against him, raking her nails across his cheek – drawing blood – as he picked her up, dumping her in the tub before taking his gun out and aiming it at her chest. Ruby stopped fighting and stared up at him, open-mouthed.

‘Come on, sweetie, I-I-I’m sorry. I didn’t do it on purpose. We can get through this, we always do, we…’ she faltered, her gaze fixed on his finger as it pressed against the trigger. ‘There’s the   will, he left—’

He didn’t let her finish. With tears coursing down his cheeks for the sister he had been jealous of all his life, he took from her the only thing he had the power to – her life.

It was finally over. 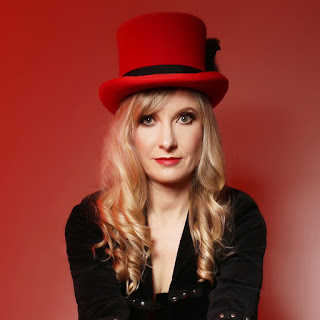 I grew up in Manchester, moving to North Wales in 2005 where I live with my two cats, Jasmine and Texas. I have always had an interest in the darker side of fiction – particularly in two areas; crime and the supernatural – but it wasn’t until my mid-twenties that I began taking a serious interest in writing. I published the first novel in my BONDS series in 2013 and have since followed it with the second and third novels in the quartet, BROKEN BONDS and BONDS RE-BOUND. I am currently finalising the fourth and final book in the BONDS series.

BONDS is a finalist in the 2020 Golden Stake Literary Award at the International Vampire Film & Arts Festival.

I have also published a collection of dark and sinister short stories entitled TALES FROM A SCARYGIRL, along with a children’s book called THE MISFITS under the pen name M A Cope.

DARKLY SINISTER, the second volume of TALES FROM A SCARYGIRL comes out on 31st October 2020. In this disturbing collection of chilling tales, I take you on a journey to discover the wickedness of the human psyche, delving into the minds of a selection of murderers; all calm and composed on the outside, but harbouring depths of depravity within.