Interview with Saralyn Richard, author of A Murder of Principal 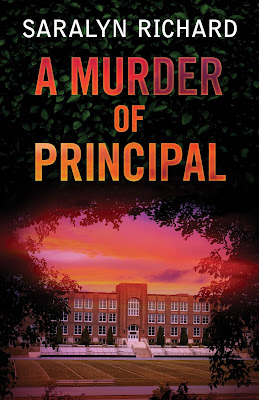 Today it gives the Indie Crime Scene great pleasure to interview Saralyn Richard, whose latest novel, A Murder of Principal, debuts on January 8, 2021.

Welcome to the Indie Crime Scene. Unlike your first two novels, A Murder of Principal is a standalone mystery. What compelled you to write a standalone story?

Thanks for hosting me. I’m honoured to be here. I love this question, although the answer isn’t simple. When I wrote Murder in the One Percent, I intended for it to be a standalone mystery. I didn’t imagine that readers would take to the protagonist so enthusiastically. When I finished writing it, I started writing another standalone, which turned out to be A Murder of Principal. By the time I was ready to submit A Murder of Principal, there was a clamouring for another Detective Parrott book, and I felt the country’s climate was better suited to Parrott’s next case in Brandywine Valley, so I wrote A Palette for Love and Murder. Both books in the series have been well-received, and times have changed.

A Murder of Principal takes readers through the back door, into the heart of an urban high school. The ensemble cast of characters face innumerable issues that are socially relevant today—sexual harassment, gangs, equity, race relations—and I believe it’s a story whose time has come.

Your protagonist, Sally Pearce, is a newly recruited Assistant Principal at Lincoln High School, brought in by the new Principal who plans a major change in the culture of the school. When he is killed and the school set on fire, she finds herself having to deal with something else - a murder mystery. Why did you write a mystery set in a High School and what are the unique circumstances of the setting?

As an urban high school teacher, administrator, and school improvement consultant, I am intimately familiar with the drama that goes on in that world. Schools are fascinating places. Large numbers of diverse people come together, hopefully with a common purpose, but there are so many individual motivations and hidden agendas, relationships and politics. All of the most powerful human emotions—ambition, pride, competition, insecurity, jealousy, animosity, revenge, friendship, attraction, and love—are bubbling under the surface of a high school’s daily life.

In addition, schools are unique institutions, because their clientele is always changing, and their goals are always future-oriented. In order to be successful, they must always be focused on change, and change is uncomfortable. That discomfort creates tension, and tension is the soul of mystery.

Sally has enormous challenges to contend with: a hostile fellow assistant principal and other crises: “gang threats, racial tensions, grievances, sexual harassment complaints...” How does she cope and what helps her to continue in the face of so much difficulty?

At the start of the book, Sally has left the classroom to become an administrator. She’s idealistic about making a difference in students’ lives on a broader level. Soon she realizes that the job of an administrator is fraught with constant challenges, those mentioned, and many others.

Sally is a can-do-it kind of woman. She’s hard-working and smart, and she cares deeply about the people in the school community. The fact that R.J. Stoker has chosen her over a dozen other candidates, and that he trusts and mentors her, bolsters her spirits as she copes with one obstacle after another. A lesser person might give up, but Sally leads with her heart, and her heart tells her she is right where she is supposed to be.

You mention in the blurb that Sally is “a woman in a man’s job, a minority in this community”. How far has your own experience as an urban high school educator informed the story?

A Murder of Principal is set in 1993. At that time, and, to a certain extent, even today, high school administrators were usually men. The prevailing theory was that women had the temperament to teach, but men had the temperament to lead, especially when dealing with more mature students. Men had fewer responsibilities at home, as well, so they could spend more hours in the building, attending meetings and extra-curricular activities.

Another stereotype involved having the administrator match the majority ethnic group in the school’s student body. The thought was that a Black administrator would be more understanding of the issues facing a Black student.

Like Sally, I had to prove myself worthy to lead in a male-dominated profession in a community where I was a minority. The prejudices and stereotypes created obstacles on top of those inherent in the profession. Overcoming those obstacles wasn’t easy, but I wouldn’t trade anything for the knowledge, experiences, and relationships I gained in that career, and witnessing the many successes of my former students.

How important are the themes of “black and white confrontations, prejudice, and gang-related crime” mentioned by Belle Ami in her praise for the book?

The social problems within the urban high school setting play an important part in the plot, but at the end of the day, A Murder of Principal is a whodunit. I hope the characters will resonate with readers, and they will enjoy matching wits with the amateur sleuth, Sally.

Is Sally Pearce a reluctant detective? What drives her to take up the investigation?

Sally is, indeed, a reluctant detective. Rather than “taking up the investigation,” the investigation is thrust upon her by virtue of her relationships with the victim and other key players. Her loyalties and concern for the Lincoln High school community put her in a position of having to act, even though she may be courting personal danger. 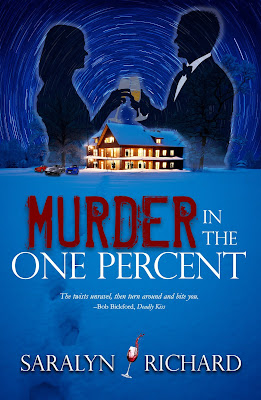 Your first novel, Murder in the One Percent, won the Killer Nashville Silver Falchion Readers’ Choice Award 2019, and several other honours. Your second book, A Palette for Love and Murder, won the Silver Medal in the Readers’ Favorite 2020 contest in the category of Mystery/Suspense, and was placed as a Finalist in the 2020 International Book Fest competition. What does this mean to you as a writer?

Winning awards is great validation that my books stand up within the genre and within the writing community. The awards give me the confidence to keep learning and growing as a writer, to keep developing my craft. There is a great camaraderie among mystery writers who attend conferences and compete with one another in these contests. The awards are definitely a part of that, although, for me, nothing is more important than knowing that my books have resonated with individual readers.

You are a member of International Thriller Writers and Mystery Writers of America, and love to connect with readers. How important is that interaction to you, and how have you adjusted to the pandemic?

Being connected to readers and other writers (who are also readers) is extremely important. Writing can be isolating and lonely, even before the pandemic, and writers’ organizations and conferences are a lifeline. Networking helps with everything from research to craft to publication to marketing. I’ve learned so much from the sharing that goes on among readers and writers, and I’ve formed life-long friendships, as well.

Many times during the last nine months, I’ve thought about how people managed during other pandemics in history. I don’t know how I would have survived emotionally if I hadn’t had access to virtual meetings and conferences.

A Palette for Love and Murder was released in February, so, one-by-one, all of the launch parties and book events I had planned for more than a year had to be postponed or cancelled. It was a huge disappointment, but every challenge is an opportunity, and we’ve done some clever pivoting that has been gratifying. For example, friends who were hosting a launch party decided to make it a stay-at-home book party with home-delivered, gift-wrapped books, refreshments, and party favors.

You also teach creative writing at the Osher Lifelong Learning Institute. Please can you tell us about the pleasures and demands of teaching people to write?

I’ve taught creative writing off and on for several decades and to different age groups, and many of my students have gone on to publish their writing and earn their livings as writers. Others have found an enjoyable outlet for self-expression. Learning about writing makes us better readers, as well. It gives us a greater appreciation for the written word in its immense variety. I’ve found the teaching to be all pleasure and no demand. There are endless topics to study and no two classes, assignments, or writers are alike.

Who do you love to read within the genre?

I’m an avid and eclectic reader, so my tastes run in, around, and through the genre, spilling over into historical, literary, and commercial fiction. With the amount of genre-blending that goes on today, there are elements of mystery in almost every genre, including non-fiction. Some of my favourite contemporary authors are William Kent Krueger, Michael Connelly, Daniel Silva, Erik Larsson, Scott Turow, Richard North Patterson, John Irving, Barbara Kingsolver, and Kristin Hannah. I also like to read less-established mystery authors, who are making a name for themselves. Some of those whom I admire are Shari LaPena, Ruth Ware, LynDee Walker, and Bob Bickford. At the Blackbird Writers’ Blog, you discussed whether or not you were an Agatha Christie fan (no spoilers!). What other classic crime writers do you enjoy - or not?

I love reading classic mysteries, and I’ve tended to read them in phases, where I devour every single book by a certain author. Some of my phases included books by Sir Arthur Conan Doyle, Dame Agatha Christie, Raymond Chandler, Rex Stout, Ross MacDonald, Dorothy L. Sayers, and more. But one of my favourite all-time mysteries is Daphne du Maurier’s Rebecca.

Crime fiction as a genre seems to go from strength to strength, and shows no sign of flagging. What is the genre’s particular appeal, especially now?

P.D. James nailed it when she said, “The murder mystery is not about murder. It’s about the restoration of order.” Crime fiction is populated by characters whose worlds are in conflict, spinning out of control. Somehow through the course of the novels, despite seemingly insurmountable obstacles, the protagonists find their way to solutions, and order is restored.

Modern readers love to escape to those conflict-ridden worlds and to engage in the puzzle-solving, along with the protagonists. The books are intellectually-stimulating and emotionally-satisfying. Like the ancient Greek tragedies, crime novels bring about a purgation of emotions and offer a ray of hope for the future. Those universal themes never get old.

In a world of “fake news” and “false flags” what can a writer of fiction, especially crime fiction, do?

As Michael Connelly says, “Writin’ is fightin’.” The characters and themes of our books should provoke thought and inspire readers to make the right choices in their own lives. At the essence of every mystery is a battle between good and evil. As writers, we can shine the light on both. We can employ twists and turns and red herrings galore. But in the end, our preferences for truth and justice and doing the right thing should be clear. 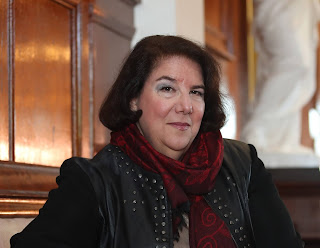 Award-winning mystery and children’s book author, Saralyn Richard has drawn from her experiences as an urban high school educator to write A Murder of Principal. Her previous books, Naughty Nana, Murder in the One Percent, and A Palette for Love and Murder, have delighted children and adults alike. An active member of International Thriller Writers and Mystery Writers of America, Saralyn teaches creative writing at the Osher Lifelong Learning Institute, and continues to write mysteries. Reviews, media, and tour schedule may be found at http://saralynrichard.com.