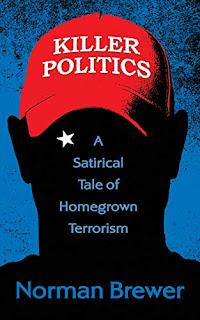 Today it gives the Indie Crime Scene great pleasure to interview Norman Brewer, author of Killer Politics: A Satirical Tale of Homegrown Terrorism.
Your novel Killer Politics: A Satirical Tale of Homegrown Terrorism is described as satire, but what started as satire seems to be turning into reality. Where does that leave you as a writer?
President Trump’s divisiveness, biases, boorish style, and many of his controversial policies were well established by the time I started writing. I was able to focus on that record as the character of thinly veiled President Tower took shape. The changing political landscape has moved closer to the storyline of Killer Politics, but that doesn’t dilute the satire.

When the novel was published in November 2019, how did you anticipate the circumstances of November 2020?
A book about a white supremacist who is inspired by a president who gives the far-right legitimacy didn’t seem like a stretch when I started writing, and still doesn’t. The public’s concerns about a peaceful transition of power echo in Killer Politics, where civil war or martial law is the desired outcome of terrorism. Despite the willingness of apologists to overlook lying, divisive conduct, and well-timed winks and nods, words do matter. As evidence, consider the alleged kidnapping plot of Michigan Governor Gretchen Whitmer.
Would that I had also thrown in a pandemic.

What is the role of the satirist (and writers generally) in a world that seems to have passed beyond satire and out the other side?
Even in a time like this the legitimacy of satire holding abusive actions and stupidity up to ridicule and scrutiny does not lessen. If anything, scrutiny becomes more important as those decisions erode governance, crucial institutions, and individual well-being.

What about President Tower. Who is he and where does he come from?
President Tower’s conduct and words develop this character. Among other things, he is abusive, self-centered, unaware of his ignorance, autocratic, a conniver and corner-cutter, and, to repeat, committed to lying. He likes political rallies, too.

Having asked you all these leading questions, please can you tell us something about the plot of Killer Politics and its protagonist Hoss, a white supremacist and terrorist. Perhaps not the most sympathetic character - how do you deal with that?
Hoss, the white supremacist, is inspired to act on his violent impulses to reclaim what he considers his birthright as a white American. He sees it being stripped away by changing demographics, the emergence of a multi-racial, multi-cultural society. He blames a feckless Congress, liberal judges, and faceless bureaucrats for changes he cannot control. He is determined to recapture how things were.
His terrorist cell is small and keeps a low profile. They use easy-to-obtain, off-the-shelf products as weapons – drones, contaminants, computers, guns of course – on equally commonplace targets: a rock concert, the food supply, the electrical grid, a high-hazard dam with people living downstream. All those factors make it hard for law enforcement to spot the terrorists or prevent their attacks.
The terrorists are not sympathetic characters. They are anti-heroes. But when they take off their terrorist hats, they appear to be fairly normal, blending in with their community. Hoss and his daughter Stella go to a Tower political rally. Ordinary conduct makes them harder to spot.

Hoss joins forces with a genuine (if that’s the word) terrorist to launch a campaign of terror on America, with a specific end in mind. This reminded me somewhat of Joseph Conrad’s novel The Secret Agent, a darkly humorous novel about anarchist terrorists and agents provocateurs. Was that in your mind in writing the book?
No, I read it too long ago, but recall it had a dastardly collection of anarchists, was highly critical of politicians in general, and that Conrad is hard to define politically. It is presumptuous to have Killer Politics in the same paragraph as The Secret Agent, but in any case, Killer Politics has a president legitimizing the radical right while assaulting institutions that underpin progressive government. Alas, that’s the situation in which we find ourselves.

Hoss and his ally are pursued by a rogue FBI agent. Who is he and what is his part in the story?
A Christmas party indiscretion leads to the agent being banished from New York to North Dakota. After a terrorist attack there, he gets a lead on the terrorists. Seeing a high-profile arrest as a ticket back to his beloved city, he chooses to not alert the bureau and goes after the terrorists himself.

How far has your experience as an award-winning reporter and editor, and Director of Employee Communications at the U.S. Transportation Security Administration influenced your writing? What unique perspective has it given you?
As a journalist, I mostly wrote about government and politics. Stories holding public officials accountable gave me the most satisfaction. Hopefully, that background contributed to a BS meter that, in turn, helped shape the satire of Killer Politics.
TSA provided an eye-opening exposure to the threat of terrorism, both domestic and international. A couple key points: Many front-line TSA employees felt that terrorists or drug smugglers or others with bad motives were always testing them, whether at airport security or in other modes of transportation, ports for example. Consistent with that, the threat is ongoing, so this book and my first one – Blending In: A Tale of Homegrown Terrorism – remain cautionary stories.

How has the appearance of Covid-19, a global pandemic, changed the emphasis of your writing? Would the story be different if you published it today?
Killer Politics preceded Covid-19, but depending on what circumstances the country finds itself in, the pandemic would be rich fodder for satire if I take another look at domestic terrorism; leadership and accountability are such big targets.
Amazon | Indiebound 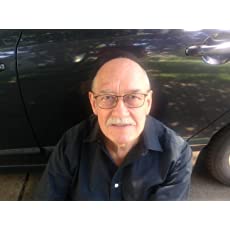 Norman Brewer is an award-winning reporter and editor who worked for The Des Moines Register and Tribune and for Gannett News Service in Washington, D.C. He was also Director of Employee Communications at the U.S. Transportation Security Administration, where exposure to terrorism issues helped shape his books. Blending In - A Tale of Homegrown Terrorism, a novel, is Brewer's first book. Killer Politics is a sequel but also a stand-alone book.