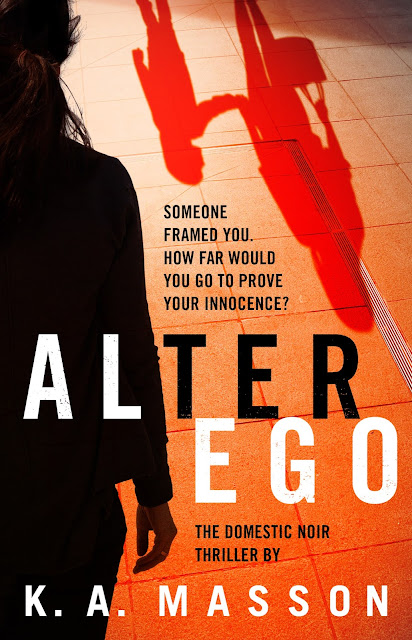 Pounding on the door. My seven-year-old son shaking me awake. My head fuzzy with sleeping pills. The hallway flashing with blue light. This morning my life will change forever.
Alex Kendrew is juggling single parenthood, work and dating; with a wild, impetuous streak that’s hard to keep in check, she struggles to find a balance and feels perpetually guilty for the choices she makes.
In K.A. Masson’s domestic noir thriller, Alex begins a passionate affair when an old flame gets in touch. But one morning, the police arrest her for his attempted murder. Someone is framing her; can she prove her innocence as the evidence mounts against her?
Buy Alter Ego today and start reading this fascinating portrayal of a woman caught between her desires and responsibilities.

I was dreaming, surely. My son had finally passed the age where he woke up at five  every single morning. Still, the arrival of parenthood brought with it an end to uninterrupted  nights and, for me anyway, the ability to sleep through anything.

Except for on this occasion. It wasn’t a dream. Ned was shaking my shoulder, with all  the strength his whippet-thin, seven-year-old frame would allow.

‘What is it, darling?’ I asked, not quite managing to open my eyes.

I hadn’t, but my fuggy head was a reminder that I’d taken a couple of sleeping pills at  two in the morning. Banging, then the metallic clatter of the doorbell for six or seven  seconds, more banging. I leapt out of bed and grabbed my dressing gown.  ‘Stay there, I’ll just be a minute.’

As I darted down the stairs, I could see blue lights flashing through the first-floor  window.

Another round of pounding, accompanied by a low bellow through the letterbox. ‘Police, open up.’

As I ran down the last flight of stairs, two thoughts formulated in my head.  One: something similar to what had happened one night a few months ago. A man,  trying to escape from a criminal gang, I found out later, had got cornered in our back garden.  He’d pleaded with me to let him in through the patio doors. Yes, he did have the fear of God

in his eyes. But he must have been nuts to think I was going to invite him in. Instead I’d  picked up the phone and called 999. He spat on the glass, told me I was a ‘fucking bitch’, and  shinned over the fence into our neighbour’s garden.

Two: Sean, Ned’s dad, my ex, had killed himself. Or attempted to. It wouldn’t have  been the first time. Or the second. For the last few years, I’d kind of expected it to happen at  some point, a knock at the door from the police, just like this.

As I reached the bottom of the stairs, the internal debate I was having over which scenario was more likely was brought to an abrupt halt by more hammering. I tried to turn the  Chubb key in the bottom lock, my hands shaking uncontrollably.

‘What’s going on? You’re going to break the door down.’ I finally managed to open  it, forgetting the chain was still on.

The chain stopped the door opening by more than a few inches. All I could see was  the upper body of a man, taller than me, around thirty, unshaven, wearing a short-sleeved  white shirt underneath a tight, thick bodywarmer.

I answered through the small gap. ‘Yes, that’s me, what’s going on?’

Without warning the hallway erupted with the shrill screech of the burglar alarm. I  ran to turn it off.

‘Take the chain off immediately or we’ll force entry,’ he barked.

I could just hear Ned’s voice above the noise. ‘Who is it? Why are they shouting?’  I turned round for a moment and saw that he’d appeared at the bottom of the stairs,  hands covering his ears, his blue furry penguin held tightly by one foot. As I undid the chain,  I turned to him again. ‘Don’t worry, it’s nothing. Go back upstairs.’

The door was flung open. The young officer I’d seen through the gap in the door grabbed  my arm and pushed me against the wall, using one elbow to pin me in place. I winced, my shoulder muscles screaming as he pulled my wrists together behind my back and closed the  handcuffs around them. 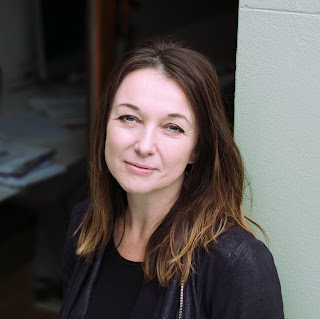 K.A. Masson is a graphic designer who lives in London with her teenage son. Alter Ego is her first novel, jump-started by a chance encounter with a Faber Academy “Start Your Novel In A  Week” course. She is fascinated by books with a psychological element and the lengths people will go to when pushed by anger, fear, jealousy, and hate, and is currently working on her second thriller.