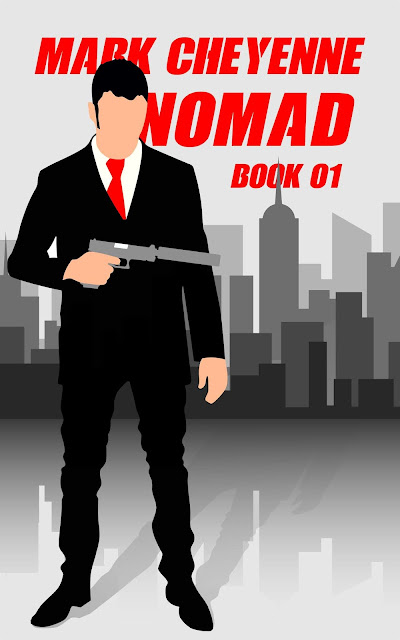 His codename is Nomad. And he is an assassin. He works for the Syndicate: a mysterious international organization whose main objective is to hunt down and eliminate warlords, terrorist leaders, crime bosses, and other wicked persons the world could do without.

After Nomad eliminates his last target, a male assassin gets on his tail. He is as skillful and dangerous as Nomad himself.

Who is he? Why is the assassin after Nomad? Who hired him? Who wants him dead? Is it the Syndicate? If the answer is yes, then for what reason has the organization put him on its assassination list?

Nomad has a lot of questions and no answers. But he knows one thing for sure: the mysterious assassin is getting closer and closer.

She was young, probably no older than eighteen or nineteen. And she was beautiful, too. The girl wore little if any makeup. She didn’t need it. Her skin was smooth and white. Her eyes were large and blue, and her sensual lips were full and pink.
The thin fabric of her nightgown did nothing to conceal the girl’s slender body. She was wearing only a pair of pink panties underneath. Her curly blond hair was tied back in a loose ponytail that reached just past her symmetrical shoulders.
She was seated on the edge of her bed with her hands folded in her lap. Her large eyes stared off into space. The girl appeared to be lost in thought.
She had remained in that position for the past twenty minutes, not moving at all. She was as still as a statue.
Although I was about a thousand yards away from the girl, I could see her as clearly as if she were right in front of me. I was on the flat rooftop of a multistory apartment building, lying prone behind a Knight’s Armament SR-25 sniper rifle. I peered through the powerful telescopic sight above the suppressed weapon.
The girl’s head was directly in the crosshairs of my scope. I could take her out easily and effortlessly. Only I wasn’t going to kill her because the young hooker wasn’t the one whom I’d been hired to smoke. My target was a john who had yet to show up.
It was a chilly, windy Friday evening. The noise of traffic was coming from the street down below––busses groaning, horns blaring, engines revving, tires screeching. It was the rush hour, and people were returning home from work.
I shifted my eye away from the scope and glanced at my watch. The target was to arrive at the prostitute’s place in fifteen minutes. Hopefully, the target wouldn’t get stuck in traffic. I really hope he would turn up on time.
I usually didn’t mind waiting, because it was an essential part of my job. It was just that I’d been lying on the rooftop for thirty minutes now, totally exposed to the cold weather, and I was getting tired of it.
A large vapor cloud formed in front of my face as I let out a breath. It was really cold. I had a muffler wrapped around my neck, and the collar of my jacket was turned up, but I was freezing nevertheless.
Surely, it wasn’t the first time that I’d worked in a cold country. I’d been all over the world, more often than not visiting countries that were way colder than Serbia was. Though my body was well accustomed to cold weather, I still preferred to live and work in a warmer climate.
I put my right eye to the scope again.
Half an hour later, when I started to lose feeling in my cheeks, a black Mercedes pulled into the parking lot of the building where the young hooker lived.
The rear doors of the sedan swung open, and two heavily built men climbed out. They shut the doors and took a few moments to survey the parking lot. Then one of the two bodyguards opened the rear car door and leaned inside to give whoever was in the back the all-clear signal.