The Grand Man: A Scandinavian Thriller by Florence Wetzel 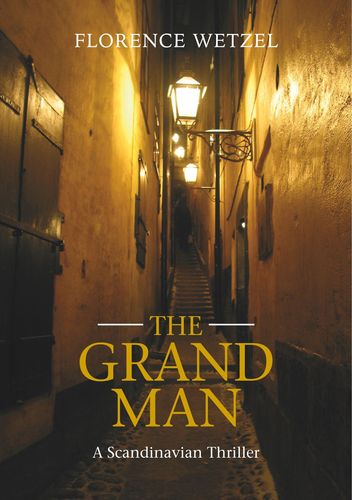 About The Grand Man:

Journalist Juliet Brown is a ScandiGeek, a person who is enamored of all things Scandinavian. An unexpected opportunity sends Juliet to Sweden to interview an American jazz singer, and she is quickly drawn into the vibrant Stockholm music scene.

When one of Juliet’s new friends is murdered, she finds herself embroiled in a real-life Swedish mystery. Journalist Magnus Lindblom offers to help Juliet despite his own struggles, which include hiding the truth about Stieg Larsson’s missing fourth book.

Emil Sjöö is waiting. He is standing outside the Grand cinema on Sveavägen, the long street that runs through the heart of central Stockholm.
Inside the cinema, his friends Johan and Agneta are watching The Mozart Brothers. The movie started at quarter after nine, but Emil had to work late and couldn’t join them in time. He decided instead to come by at eleven o’clock when the movie ended so they could go for a drink. It was lönehelg, the weekend after the monthly paycheck, and the three of them usually celebrated by having a few beers.
As Emil stands in the cold, he passes the time by watching a strange fellow who is also waiting in front of the Grand. The man is pacing the sidewalk and muttering to himself, a burning look in his eyes. A short and stocky Swedish man, perhaps in his late thirties, with steel-rimmed glasses and a dark cap with earflaps. The man was probably drunk, but Stockholm was always full of drunk people during lönehelg.
The doors to the cinema open, and soon people start trickling out. Johan and Agneta are among the first to appear, and Emil calls out to them. They exchange greetings, then turn left and walk toward Odengatan, where they will have their pick of bars.
As they walk, Emil asks if they liked the movie. Johan says it was sådär, so-so.
Agneta agrees with Johan, then says, “Guess who was sitting behind us? The prime minister! Palme! He was with his wife and one of their sons.”
“Did you talk to him?” Emil asks.
“Of course not. We let him be.”
A half hour later, sitting by the front window of a bar on Odengatan, they see a police car rush past. Then another. And another after that. Fifteen minutes later, a man bursts into the bar and shouts out the unthinkable news that the prime minister has been shot and killed, right down the street on Sveavägen.
A terrible chill shakes through Emil. Johan turns pale as a corpse. Agneta bursts into tears.
***
The next evening, the three of them are together again. This time, they are sitting in police headquarters in Kungsholmen. Witnesses have been asked to come forth, including anyone who saw Palme the previous night, or anything else that might be relevant to the murder.
Johan and Agneta tell the police about seeing Palme in the theater. Emil tells them about the odd man waiting outside the Grand. Waiting, perhaps, for the prime minister.
Several other witnesses report seeing the strange man. No one knows his name, so the police give him a nickname. They call him Grandmannen. The Grand Man.

Florence Wetzel was born in 1962 in Brooklyn, NY, and grew up in Westfield, NJ. She went to Barnard College where she studied with writer B. J. Chute. Florence is the author of several novels, as well as a book of poetry and the jazz mystery novel Dashiki. She worked as a jazz journalist for many years, including co-authoring the autobiography Perry Robinson: The Traveler. Florence lives part-time in Stockholm.