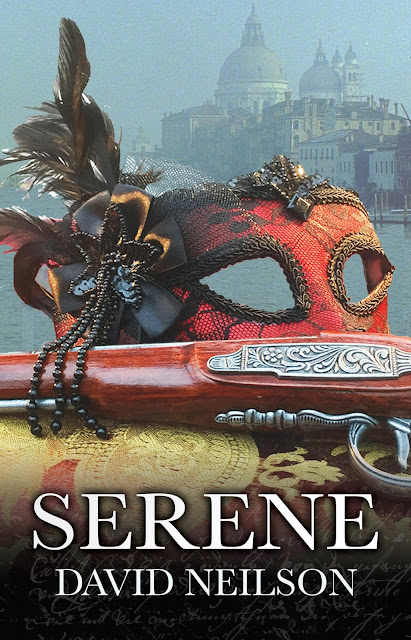 Violent moneylender Corona Mundt warned Sophie not to come back to Venice, so she shouldn't be guarding Archduchess Isabella at the Carnival - any more than Isabella should fall for louche, penniless, would-be librettist Larry da Ponte. And once the two of them get together, it’s only a matter of time before Sophie comes face to face with her worst enemy. Serene is the third in a series of novels from the era of Mozart and Maria Theresia.

Isabella fastened her cloak at the neck. “What is there to discuss? We know what we want.”
“You can’t be an archduchess here. We need to move. Now.”
Even as she scowled, someone pounded the door. Three thuds. Nothing like the tentative knocks I’d heard at Girolamo’s.
Isabella’s cheeks were deep pits as she stared at me.
“Could be the authorities.” I nodded at the bowl of pounce on their credenza. “Pick that up.”
Her eyes were wide with puzzlement.
“Stand ready with it,” I said. “Sling it when I give you the word. Larry, on my signal, open the door.”
Perching on the edge of the table, I reached for my bag and took out my pistol. Isabella pushed herself up. Larry shifted his weight from one foot to the other.
Two more thuds, a moment between them. That door wouldn’t resist a determined boot. Isabella held the bowl in quivering hands. I waved her to the side and levelled my pistol-sight at the door.
“Larry,” I said.
He paced across the floorboards, turned the key, and eased open the door. It was pushed wide. Larry raised his hands slowly and stepped back, out of my line of fire.
The man who came in, his pistol trained on Larry’s waist, was almost as broad as the door. His coat was the colour of beetroot, and his wide collar made him look as if he had no neck.
A friend followed him in, the queue of a soft sailor’s cap down the side of his neck. “Abbiamo fortuna, Carlo. The princess and the poet.” He grinned at me. “And the prize.”
Carlo glanced at Larry on his left, Isabella on his right. “Cover him, Ezio.” He switched his aim to me. “Put the pistol down.”
A bead of sweat trickled from Larry’s unkempt hairline. Ezio kept his gun on Larry, but his eyes drifted back and forth between me and Carlo, and his thumb wavered on the grip.
I set my pistol on the table and shunted it away by the butt.
“On your feet.” Carlo’s lips didn’t move any further than they needed. Deep bags hung under his eyes and his cheeks were pouchy. “Man wants to talk to you.”
“Pavo Kružić?”
Carlo shrugged. “He’s paying, all I know. Get moving.”
I grabbed the edge of the table as I stood, my hair waving about my face. “He’ll kill me.”
Carlo’s face was still. “Reckon. You knew the game when you got in. Don’t see you can complain now.”
“You ever been there when Corona gives them to the dogs?” Ezio said. The tips of his ears stuck over the brim of his hat. “Like to see that.”
I stamped my foot with a strangled cry and plunged my hands into my pockets. “I won’t go!”
“Can take you dead, too,” Carlo said. “Long as the man sees you, that’s it. Need to kill your friends too, though.”
I looked at Isabella. “Los!”
She tossed the pounce into Carlo’s face. Yelling and sneezing in the flurry of sand, he fired into the floor. I pulled the trigger on my snub-nosed lady’s gun, shooting through my skirt, and he reeled backwards with the impact.
Ezio jumped aside. I scooped up my pistol and shot him between the eyes. The recoil caught me on one heel, and my head cracked against the table as I fell.
In the sear of light and pain I heard the rip of another pistol, and Isabella’s piercing scream. 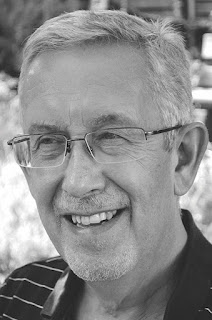 I’m Scottish, born in Glasgow, and for many years I worked as a teacher and educational marketer. Nowadays I live on the Rhine, just south of Bonn, Germany. I’d wanted to write something noir-like for years, but couldn’t settle on any main character or setting. Only when the age of Mozart and the Habsburg empress Maria Theresia occurred to me as a setting - one I feel very much at home in - did Sophie Rathenau, my main character, turn up and demand to be written about.The publication of Serene brings the series to three books, and I have another four in mind before it’s completed.