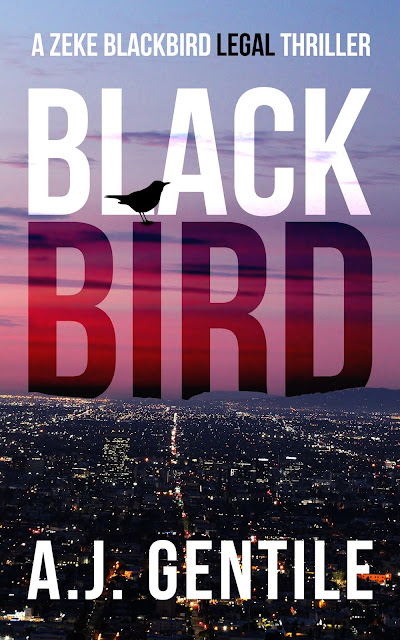 An actress is murdered at a Hollywood house party and a naive young man stands accused.

In this debut novel, greenhorn attorney Ezekiel Blackbird has something to prove as he struggles to establish his own practice in Los Angeles straight out of law school. Eager but insecure, Zeke would prefer to attract easier, high-paying corporate clients, but he can’t refuse the chance to represent an alleged murderer who desperately needs his help. His love life is in tatters and his physical safety is under threat, but Zeke remains loyal to his client despite the difficult lessons he must learn to become a shrewd criminal attorney.

"Hello?" Zeke mumbled into his phone, wondering who could be calling so late.
"Hi. I'm calling for Ezekiel Blackbird. My name is Alejandro Garcia. I'm in trouble, and I found your website online, so I called."
First client? Zeke thought to himself. He had worked on a few small things since opening his own firm. Mostly small claims cases and wills for his parents and sister. This could be his first, honest-to-goodness client.
"Great! Let me take down your information, and I'll call you back in the morning—"
"No, you don't get it. I need your help now. Cops are asking me questions and stuff, they told me to stay right where I am."
"Ah, I see. Don't say a word. Text me the address." Zeke hung up and looked up Alex's location. Nice neighborhood, he thought. He had taken his girlfriend's toy poodle to a dog park up in Hollywoodland a few months ago. It was ritzy. "See you soon," Zeke texted back.
This must be what it feels like to be a real lawyer, Zeke thought to himself. Achy and bleary eyed, Zeke propped himself up and turned on his bedside lamp. After brushing his teeth and trimming up the edges of his beard, he pulled on jeans, a white dress shirt, knitted red tie, and a dark grey sport coat. Zeke's supervisors had groaned about his casual business attire throughout his many part-time jobs in law school. But at 29, he was intransigent—and like most other millennials—he had problems with authority figures.
He walked into the living room. The door to Matty's room was open; he was probably working the late shift. Zeke and Matthias "Matty" Fox were friends from USC, where they met as roommates freshman year. After they graduated from undergrad three years ago, Matty had worked a series of dead-end bar-back jobs. Zeke offered to hire him on to help with the office work, and Matty agreed, but also kept his hours at the bar because business had been nonexistent.
Zeke walked out of his Atwater Village apartment. Employees at the garment manufacturer across the street—Matty called it their neighborhood sweatshop—were just beginning to arrive for work. Patrons were smoking outside of a nearby billiards bar. He climbed into his navy blue '93 Volvo 240, which had just turned the corner from being lame to retro chic. Emissions be damned, Zeke thought to himself. As he switched on the ignition, Queen's "Fat Bottomed Girls" blared from the stereo. He immediately turned it down, not wanting his neighbors to know the depths of his depravity, and started off towards Hollywood.
What am I doing? Zeke thought about how excited he was when, a few months ago, he opened his own law practice. But business wasn't good. He was eager to join the ranks of white shoe law firms working for huge corporate clients. He wanted glass-walled conference rooms, free meals, an office gym, and complimentary coffee. The thing he wanted most, though, was his name on the side of the building. That was a non-starter when he was applying for jobs, of course, so he did the only reasonable thing he could think of: hang out his own shingle. Zeke was in good company, though. Los Angeles is a city of hustlers. Everyone is building their own brand. Coffee shops are packed with starving screenwriters. Tourist attractions are jammed full with YouTubers filming their daily vlogs. In Los Angeles, if you don't work on your own dream, you work on someone else's.

A.J. Gentile writes fast-paced legal thrillers. He is husband to a therapist and father to a tiny human, but he has also been a lawyer, world traveler, garage band guitarist, and constant source of disappointment to his Chinese teachers. Raised in Southern California, he now enjoys soaking in the southwest China sun.