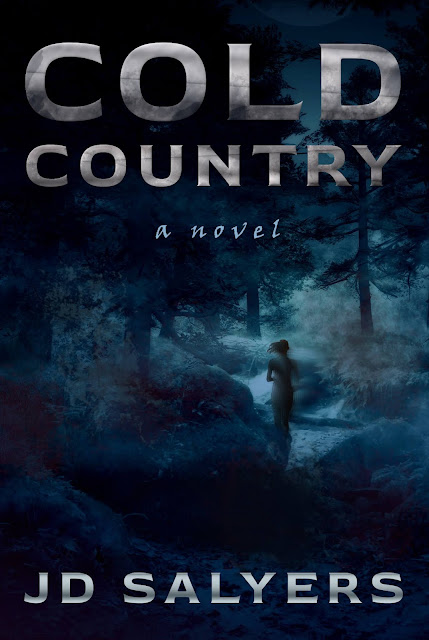 
ALONE IN THE WOODS

Quinn Galloway is in danger. Her husband has disappeared from their secluded cabin, the biggest snowstorm of the season is moving in, and she’s alone in the dangerous expanse of the Appalachian Mountains.

There is a dark stranger on the mountain, and he’s set his sights on Quinn. By the time night falls the sweet, cozy cabin has become a snowbound prison, surrounded by plenty of predators. For Quinn Galloway, isolated and defenseless, winter is now the enemy. Over the course of a single spine-chilling night she must face all of her nightmares come true, and she might not make it off the mountain alive.

Beside her, Burns barked, a sharp sound that ripped through her thoughts and made her jump. The coyotes looked up - three of them, that she could see - and Burns took off. They scattered away from the light and the impending teeth.
Burns,” she called. He paused, mid-step, but didn't take his eyes off the spot where the coyotes had been. Her gut wrenched tighter…
Tonight, there was nobody to go over there for her. There was only her, Quinn, alone in the dark with two dogs and a fear that she couldn't place.
The wind caught a few strands of her hair and blew them into her face. She scraped them away, took a deep breath, and forced herself to take a step. It was a horrible feeling, just like before. Like she was about to step out of an airplane, or off a tall bridge. Every nerve ending in her body felt raw, every brain cell screamed for her to stop.
But she couldn't stop. She couldn't just walk away and not see.
That was it - the seeing. She didn't want to, but she was the only one. There was no one else to do this for her.
She had to go.
Burns barked again. He was staring toward the darker woods beyond. She glanced in his direction and didn't see anything, but she knew that the coyotes hadn't gone far. If she went inside now, like she so desperately wanted to, they would come back.
But...come back to what?
The gut feeling crawled up into her throat. She choked out a small sob. Retro nuzzled her hand.
She forced her legs to move.
The thin lights from the yard didn't reach quite this far, so the long shadows of the cedars blended into the woods beyond. For all she knew, there was a ten story monster behind those cedars, ready to eat her alive. The wind howled through the thin trees as she approached, bending the tops and making the thick, sharp needles shudder. She shivered too, cold beyond belief.
Burns was sniffing around the bottom of the trees. She didn't know why, but she didn't want him over there. “Stop it. Burns, come.”
He looked up, looked back at what he was sniffing, and reluctantly trotted her way through the falling snow.
She gripped the flashlight and strode forward a few steps, both dogs by her side again. The flashlight beam jittered with every step and her inner distress threatened to halt her in her tracks, but she didn't dare think about it and she didn't dare stop. If she did, she would never start again.
It was no more than a couple of hundred paces to the cedars, but each one felt like it took an hour. The snow was piling up so that she kicked it out in front of her with her toes. It fell and made speckles ahead, like it was showing her the way.
She knew the way - she just didn't want to go.
Her flashlight caught a hint of yellow, and another sob jerked from her throat. Her feet tried to drag again. If she didn't go forward, she could pretend like she didn't know….

JD Salyers is the pen name for a mother and daughter writing team.  Both were born and raised in the beautiful mountains of West Virginia to a large family of natural story tellers which shaped their imaginations at a young age.  The Outer Limits,  Alfred Hitchcock and the horror stories of Stephen King, Dean Koontz and Peter Straub influence their writing today.  Their stories are the dark and disturbing kind.  The kind that scare the bejeebers out of you, not because they’re populated with vampires, werewolves and demons, but because these horrific things could happen to any of us.  When they’re not dreaming up terrifying scenarios for their protagonists, they are avid quilters, carrying on yet another family tradition.