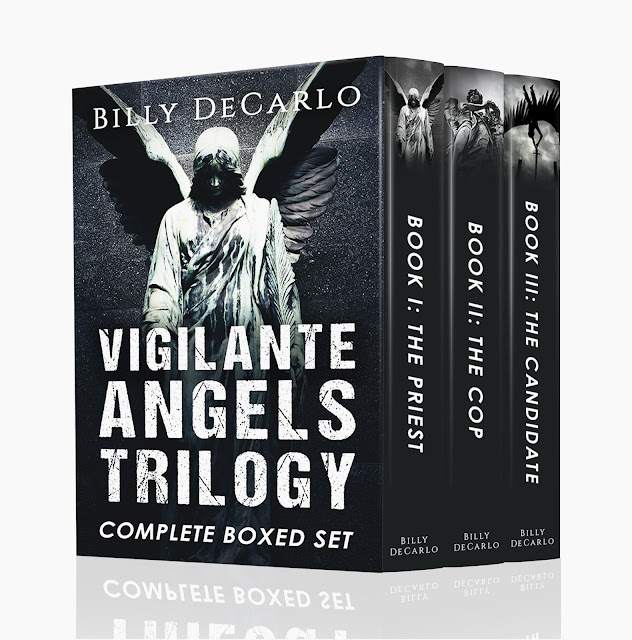 About the Vigilante Angels Trilogy:

A hateful, divisive presidential candidate, a pedophile priest, and a corrupt cop cross paths with a vigilante former Marine who has nothing to lose.

It's said the wheels of justice turn slowly. Screw that. He enlists the help of an unlikely cast of fellow cancer patients to target his hit list.

It's said that in the end, everyone gets what they deserve. Who will die and who will live?

This is a boxed set of the complete Vigilante Angels trilogy. A dark, gritty, noir crime novel series, available in paperback, Kindle ebook, and audiobook. Read for free on Kindle Unlimited!

Tommy, a retired cop and former Marine, has cancer. He realizes he can kill without consequences, and he's got a list.

Pedophile priest, corrupt cop, fascist political candidate--where to start? He enlists the help of an unlikely cast of unusual fellow patients to target his hit list.

The hardest battles, the ones he hadn't counted on, are right in his own home: an alcoholic, unfaithful wife and bringing himself to accept his son's sexuality.

In book one of this trilogy, Tommy befriends a black ex-con who is a fellow patient. As both seek redemption for their past misdeeds, and with nothing to lose, they set their sights on a priest who is accused of molesting children.

Will his fight for good come closer to home than he imagined?

In book two of this trilogy, Tommy finds himself under investigation by a racist, corrupt cop who torments Tommy and his family until the unthinkable happens. Tommy partners with a one-eyed Korean martial-arts expert and a black motorcycle gang to seek revenge.

Will justice be served?

In the exciting conclusion of the Vigilante Angels trilogy, Tommy finds himself on the run and hiding in the Florida Keys. He's prepared to let his disease claim him and die in peace.

That is until he finds love and a mysterious rejuvenation. He begins to follow the meteoric rise of a politician that stands for everything he despises and sees one last chance to make the world a better place before dies.

In the race against time, which will prevail?

THE PRIEST SWEPT ACROSS THE DAIS with grace, although his heart held malice.
A boy watched from a pew near the front of the otherwise empty church. He pretended to flip through a hymnal and contemplated whether his parents would believe him if he decided to run. He imagined his mother at home preparing dinner, proud that the priest had picked him out of all the other altar boys to perform these extra duties after school. Peering over the book, he wondered how the man could move so silently, almost appearing to float. Are there even legs under those long robes? He edged closer to the aisle.
“Going somewhere, my son?”
It sounded like the true voice of God. Its deep timbre echoed from the high ceiling and marble walls, surrounding him.
“No, Father.” He thought his voice sounded meek by comparison—squeaky and scared. He was scared. He tried again, this time in a stronger voice, the more confident one Dad had been coaching him to use. “No.” This time it sounded better, at least to him. Where are you, Dad?
He looked at the stained-glass figures in the windows above. Their eyes seemed cast down at him in pity. Jesus. Mary. Joseph. He asked for their help. Didn't they stand for goodness?  He thought about the superheroes in his comic books and imagined one sailing through the glass to save him. He wondered whether God was looking down, too. Why doesn’t He do anything?
He watched the priest clean up around the altar. His tall, thin build and long limbs made him look like a praying mantis. The boy’s gaze moved upward, to the massive crucifix on the wall above the priest—Jesus pinned to it with his crown of thorns, eyes closed, blood dripping from wounds on his hands, feet, and abdomen. Fall. Fall on him. Fall on him, Jesus. You’re supposed to be the Savior.
A booming sound startled him as the side door slammed behind Charles, the old black maintenance man. The kids all talked about how Charles had done time in prison. Who knew if it was true? That was the least of his worries right now, anyway.
“What else can I do tonight, Father?” Charles asked. He looked over toward the boy.
The boy read a look of concern on his face and tried to respond in kind, staring back hopefully. He trusted Charles, who’d only been nice to him in the time they had spent together, and he’d always felt sorry for the priest’s harsh treatment of the man.
“Nothing more, Charles,” said the God-voice. “That will be all for today.”
Charles began to leave but hesitated. “You sure you don’t want me to sweep up in here?”
“That will be all, Charles.” The priest was polishing a silver chalice, his back to them both.
Charles looked over at the boy again. “Can I walk the kid home, then? He done here too?”
The priest turned to face them. His ruddy face and red hair seemed to glow under the lights. This time he spoke softly, but his voice commanded an end to the discussion. “That will be all, Charles.” 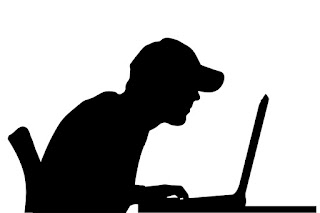 Billy DeCarlo is an American author of novels and short stories. He writes because he needs to write.