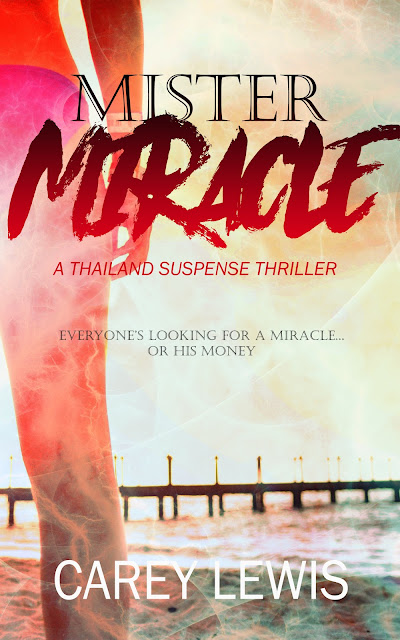 Hugh Gallant has survived being hit by lightning, throwing himself off a skyscraper, and a divorce from a redheaded woman. He has also won the lottery three times and moved to Thailand, leaving his former life behind. He is known as Mr. Miracle.

Dutch used to be Hugh’s best friend. Together, they concocted a scheme that resulted in a man plummeting thirty-eight floors to his death. Dutch must bring Hugh home or have the murder put squarely on him. But he’s not the only one searching for a Miracle.

The ex-wife has teamed up with a former rapper and a furnace repairman who moonlight as criminals to swindle Hugh. They continually raise the stakes when each plan fails, going from extortion, abduction, to even murder, until they can find some way to make Hugh give up his millions. They learn miracles are hard to come by.

Dutch realizes ‘The Land of Smiles’ isn’t just sandy beaches and bikini clad women, and moonlighting criminals can prove more deadly than full time ones. He needs to decide if he will risk his life to protect Mr. Miracle, bring him to justice, or make a play for the money himself.

He grabbed the article, the one about this guy named Hugh Gallant winning on a scratch ticket on live TV and headed into the living room where LaGarrett was sitting on the couch in nothing but his boxers and a Mongol hat, smoking a joint by the light of a lava lamp. All while wearing sunglasses.
“You ever hear of this Mr. Miracle?” Bobby asked.
LaGarrett didn’t say anything so Bobby dug out a remote control from the mess on the coffee table, beside LaGarrett’s crossed feet, and turned off the radio. “Shit son,” was all he said.
“You ever hear of this Mr. Miracle?” Bobby repeated, holding up the cut out article.
“Crazy motherfucker thinking I be reading newspapers.”
“This guy, check this out. He gets hit by lightning right? Survives that, comes out of a coma then decides to kill himself. He flings himself off a building, the wind pushes him back in a few floors down, right through an empty window. He’s in the hospital again, someone buys him a scratch ticket, he wins fifty grand.”
“Shit, that being luck right there.”
“He ain’t done. Gets out, buys a lottery ticket, wins ten million.”
“Mr. Miracle,” LaGarrett said, smiling ear to ear, taking another hit from his joint.
“News station picks up the story, they want him to reenact him scratching the ticket? He goes on TV, they give him the ticket, he borrows a penny—”
LaGarrett started laughing. “Motherfucker winning ten million still needing to leech a penny? Tell me my boy being a brother.”
“I’ll get to it. He gets his penny and starts scratching. Don’t he win again? Hundred grand this time.”
“Never mind. Ain’t no brother being that lucky.”
Bobby stepped forward and put his hand out, asking for the joint. He saw the confusion on LaGarrett’s face behind the sunglasses as he passed it to him. Bobby took a long haul and held it in his lungs, said “Guess where I got this from?”
“Looking like the newspaper. Want me to guessing which one?”
“The Beaumont lady. It was in her nightstand.”
“You can’t be taking a woman’s panties like a normal man?”
Bobby let the smoke out of his lungs. “I think it’s her ex-husband.”
“The guy was there you fixing her heat?” LaGarrett took the joint back.
“No, I told you they seemed like old friends or something. This guy here,” he said, pointing to the picture in the article, “Looks like the same one I saw in the wedding pictures but twenty years later.”
“Bobby, I got to be asking what all this having to do with the price of oranges in China.”
“The guy, Mr. Miracle? He’s got ten point one we know about.”
“You thinking the lady went and got herself a nice alimony payment?”
“That or has a way to get to him.”
“Ain’t you having the motherfucking cleverest way of getting back in on the woman’s life?” 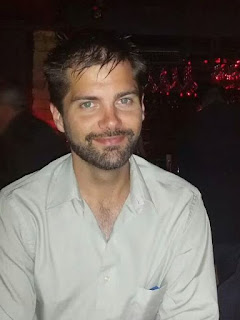 Carey Lewis traded a mundane job in Toronto, Canada, in favor of a backpacker life of nomadic travel. He can be spotted with his beautiful fiance somewhere in Southeast Asia, drinking coffee and scribbling furiously into a notepad while cursing his credit card debt and writing about bad guys that are cooler than he'll ever be.