On the Side of the Angel: A Bartering Angel Story by J. David Core 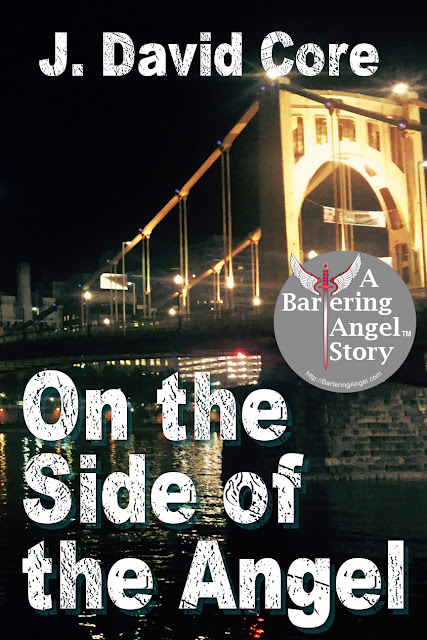 About On the Side of the Angel:

Lina Forman has an assumed name, a vendetta, a résumé of varied skills, and the knowledge to make her a force to fear.
Known in the criminal underground as The Bartering Angel, a mysterious “fixer” whose help keeps the bad guys out of trouble, she assumes the name Lina when she arrives in the Pittsburgh area in 2005. When the son of a local drug runner murders a convenience store clerk during a botched thrill robbery, Lina must keep him out of jail to prove her worth to the local criminal underground. Despite her elaborate scheme to confound the evidence and mislead authorities, two local cops threaten to disrupt her plans and steer the FBI on a path to avoid her red herrings.
Can Lina preserve her reputation and make good on her promises before she has to abandon her vengeance, change her name, and start again? Or will a careless oversight expose her secrets?

Three days after her introduction to Carlos/Chucky, Angel/Lina was sitting in one of those old-fashioned trolley diners in a small town in north-eastern Ohio waiting for the would-be client Carlos had found for her. She was sucking on the thickest chocolate shake this side of Wisconsin if the menu was to be believed when a thin, balding man with bad teeth sat across from her. “Are you Angel?” the man asked. He was wearing slacks and an ill-fitting sport coat. His shoes were crepe and pseudo-dressy. His shirt was sweat-stained.
Lina tightened her lips around the straw and pulled. She was growing increasingly uncomfortable. This place was way too small. The bodies of the other patrons were closing in on her. “The raven flies at midnight,” she said in a parody of cloak-and-dagger code phrases.
“What?” the man said stunned.
“Carlos didn’t give you the response phrase?” Lina asked continuing the gag. The balding man just shook his head. “It was ‘give us a kiss,’ after which I was to hold you in a tender embrace and put my tongue in your mouth. Never mind, the moment has passed.”
His jaw dangling, the balding man shook his head. “I’m just messing with you,” Lina said. “Yeah, I’m Angel. Have a seat. ’Sup?”
“I’m here representing a man with a very particular problem involving the Ohio State Lottery.” The man said touching his fingers together. Lina was immediately apprehensive. If this was just an agent, she couldn’t afford to give him any of her secrets. He’d have to pass the info on, and that was too many ears and too much risk of eavesdroppers.
“The lottery,” Lina said. “What kind of problem?”
The man took in air to speak, but stopped himself. After his thinking pause, he said, “Carlos says that you can prove your abilities before we decide if we want to pursue your services.”
“That’s right,” Lina said, “I can, if I choose to pursue your offer. So far, that’s not looking promising.”
The man seemed completely taken by surprise. “Why not?” he asked.
“First,” Lina said, “because you’re not the guy. I don’t deal with intermediaries. Second, because you expect me to put myself at risk by potentially burning a previous job before I even know what the job you’re offering is. And third, because this shake is not the thickest shake this side of Wisconsin as advertised. I’ve been to Scooters. So this just pisses me off.”
She stood and laid a dollar on the table top for a tip. As she began to pass him, the balding man grasped her wrist for a second. When he saw the glare she gave him, he released her and said, “Wait! Please. Wait here. I’ll go get Andre – er – the guy with the lottery problem. He just wanted me to make sure the coast was clear, and if possible to negotiate the deal. He’s right outside, please. I’ll go get him.”
Lina relaxed, but inside she was still tense. There was no way she wanted to be in this tiny booth with two men. It was too claustrophobic. Not that she had a problem with tight spaces, if she was in them alone; but she wouldn’t be alone. That was a problem. “Okay,” she said. “But don’t ever touch me again. And we have to go somewhere else. This place is too cramped.” 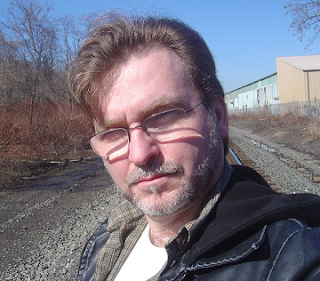 With a profound interest in religion, liberal politics and humor, Dave began writing in High School and has not given up on it since. His first professional writing jobs came while attending the Art Institute of Pittsburgh when he was hired to create political cartoons for the Pitt News & to write humor pieces for Smile Magazine.

Dave has worked in the newspaper industry as a photographer, in the online publishing industry as a weekly contributor to Streetmail.com, and was a contributing writer to the Buzz On series of informational books and to the Western online anthology, Elbow Creek. Dave’s science fiction novel, Synthetic Blood and Mixed Emotions, is available from writewordsinc.com. Dave currently resides in his childhood home in Toronto, OH with his beautiful girlfriend and his teenage daughter.

He enjoys participating in local community events & visiting with his two adult children and his grandkids.