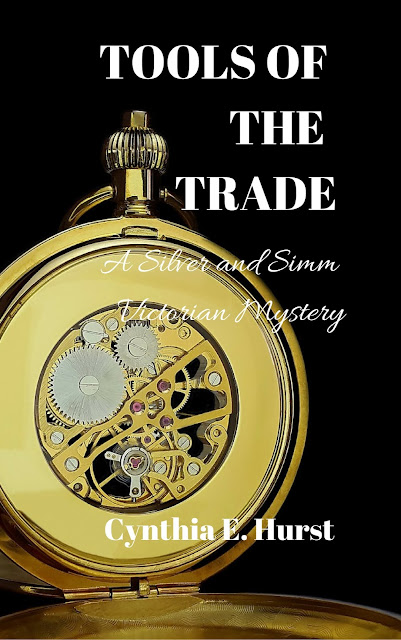 About Tools of the Trade:

He’s considered a heretic. She’s a 13-year-old thief. Jacob Silver and Sarah Simm are mistrusted by the residents of their Cotswold market town even before the suspicious death of wealthy merchant Thomas Martyn – a man with the power to destroy both of them. But a secret night visit, a hidden scandal and a second murder mean that the two outsiders on the fringes of society are now thrust into the spotlight. Can they discover the truth others have missed – or concealed?

‘Tools of the Trade’ is the first novel in the Silver and Simm Victorian Mysteries series.

(Jacob Silver, a Jewish watch repairer, is surreptitiously observing the funeral procession of a prominent citizen who died under strange circumstances.)

Ten minutes later, he was standing under the overhanging awning of the ironmonger’s, which afforded him an excellent view of Church Green. He was just far enough away not to be noticed by most churchgoers, but close enough to monitor activity both on the green and at the church.
As the hands of the Buttercross clock moved toward two, Jacob found he had company in his watching post. A man had slipped in beside him and was grinning up at him.
“Come to watch the show, Silver? Don’t blame you.”
Josiah Morton was a rat of a man, small and thin, with a pointed nose, small eyes and slicked back hair. Jacob could almost see whiskers quivering when he spoke and always half expected to see a tail poking out from under his coat. He was cunning as a rat, too, but possessed of a surprisingly educated turn of speech. As one of the town’s two pawnbrokers, his trade occasionally and regrettably overlapped with Jacob’s, and they were acquaintances, if not friends.
“Curiosity, nothing more,” Jacob said. “It promises to be quite an event. And you?”
“Oh, the same, the same. Look, there they go.”
As they watched, a hearse drawn by four black horses moved slowly down the path from the Martyn house, followed on foot by Nathaniel and five other men whom Jacob assumed were relatives or close friends. As Sarah had predicted, the procession was lavish, the horses with black feather plumes on their bridles, and the hearse polished to a high sheen. By squinting at its windows, Jacob could just make out the elaborate coffin inside, strewn with flowers.
As one used to simple pine coffins, he found it garish and ostentatious, but he supposed the family wanted to make a statement concerning Martyn’s importance and their own wealth. Certainly the visible male family members were expensively dressed, and he knew the women also would have spent a goodly amount of money on their extensive mourning wardrobe, which would be worn for months, if not years, after the funeral.
“Cost a fortune, that did,” Morton said, appraising the hearse, the horses and the clothing with the eye of someone accustomed to quickly estimating values. “You can’t say the family stinted on giving him a proper funeral.”
Jacob nodded. “It’s very impressive.”
The hearse approached the church and drew to a halt. To Jacob’s amazement, Morton removed his hat and held it at chest height, bowing his head slightly as the pallbearers prepared to shoulder their burden.
“You think I’m not sincere in paying my respects to Thomas Martyn?” he asked, catching Jacob’s skeptical sideways glance.
“I have no idea. I wouldn’t have thought you were close.”
“We weren’t. I never met the man. It’s my loss of business I’m grieving for.” 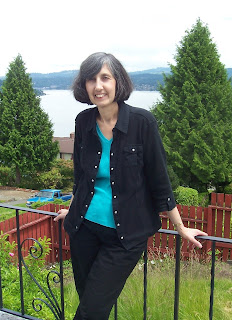 Cynthia E. Hurst is the author of two mystery series set in contemporary Seattle, the R&P Labs Mysteries and the Zukie Merlino Mysteries, and the Silver and Simm Mysteries, set in Victorian England. Like her characters in the R&P and Zukie novels, she grew up in Seattle, then graduated from the University of Oregon with a journalism degree. She worked on newspapers and magazines in the Pacific Northwest and in Britain, and also spent five years as a housing officer for British military families.
The R&P Labs books were inspired by the small Seattle laboratory where her parents – both scientists – worked, and the Zukie books by her Italian relatives. The Silver and Simm series takes place in Oxfordshire, her home since 1984.