Phyllis Wong and the Girl Who Danced with Lightning (Phyllis Wong Mysteries, Book 5) by Geoffrey McSkimming 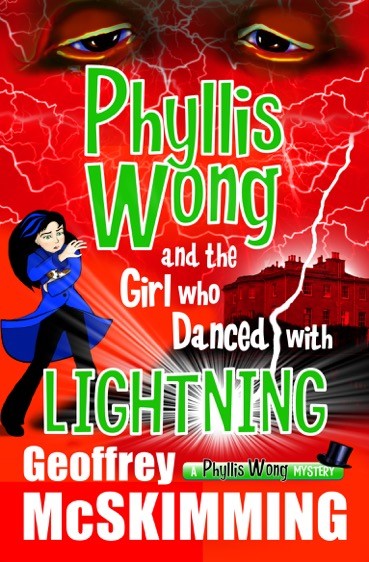 About Phyllis Wong and the Girl Who Danced with Lightning:

When Phyllis Wong's friend Clement finds a seemingly ordinary old movie poster in an antique shop, little does Phyllis know that the discovery will fling her on a journey into the past ... a journey that will lead the brilliant young magician and clever sleuth to a forgotten mystery surrounding one of the most famous stories ever written!

There was another fierce lightning bolt that seemed to rip the sky apart, as they came to the tall green doors of the villa and sheltered under the portico. Thunder raged like a thousand drunken sailors.
‘Do you think we should?’ Clement asked. ‘Go in, I mean.’
‘I don’t know about you,’ Phyllis answered, ‘but I don’t want to stay out here getting soaked. Besides, your nose is dripping. Drooping too.’
Clement felt the end of his beaky nose and frowned. ‘The latex is too thin,’ he grumbled, pulling the prosthetic off and stowing it in his pocket. He left his monobrow on, however (as he couldn’t see it, he was unaware that it was still affixed firmly to his forehead).
‘And,’ Phyllis added, ‘there might be a Pocket on a staircase in there. For when we do decide to go back.’
Clement made another noise—a sort of grumble-gurgle.
‘Okay, stay close,’ Phyllis whispered.
‘I’m your shadow,’ he said.
She took hold of the big brass lion-head knocker on one of the doors and banged it firmly, three times. The sound rose, loud above the thrumming rain, echoing into the night.
They waited a few seconds, listening and trying to detect any activity from the other side of the doors. All they could hear was the rain beating down in the garden behind them.
Phyllis looked at Clement. Daisy popped her head out of the bag and looked at Phyllis, then at Clement. Clement just shrugged.
Phyllis banged the knocker again, three more loud and echoing raps.
The only response was the rain beating down.
Phyllis gave Clement a nod, as if to say, follow me. He gulped and nodded back.
The conjuror grasped the big bronze handle on the door and slowly pushed it downwards. Then, as smoothly as she could, as smoothly as a magician knows how to shift an object so that its movement is almost unseen, she pushed the door open.
It moved without resistance, without so much as a mouse-squeak from its well-oiled hinges.
Phyllis gave Clement a half-smile. He tried to return the smile but he had so many butterflies darting around in his stomach his mouth looked like it was trying to stop something from leaking out between his lips.
‘C’mon,’ Phyllis said. She opened the door a little more and went in.
Clement, gripping his coat and the straps of his backpack tightly, followed her.
They entered a large entry hall, with cream-coloured marble tiles on the floor. At the far end of the hall a big, wide staircase rose up to the floors above; its marble balustrade seemed to shine in the light coming from more than a dozen wall candelabra lining the walls of the hall. Each of these candelabra held six candles, and the illumination from all of these was strong enough to give the hall a soft, steady, gently wafting glow.
The candlelight sputtered a little as a breeze came through the doorway. Then a sudden gust of wind whooshed through, and nearly all of the candles in the candelabra guttered and were blown out. Only the candles in the candelabrum furthest from the door remained alight.
Phyllis quickly shut the door and took a closer look at the now dimly illuminated hall.
Five doors led off it. Three of them were closed, their dark wood shining dully in the glint from the candles. The fourth and fifth doors—a set of double doors, nearest her and Clement and Daisy, halfway down the hall on the right—were open. From the room on the other side of these double doors, a wavering yellowish light was spilling out, growing bright, then fading and growing bright again.
A tall grandfather clock was ticking slowly between two of the doorways further down the hall. Around the walls, between the candelabra, big, gloomy paintings hung in thick, gold frames. The pale candlelight in the hall wasn’t quite strong enough to show exactly what was in the paintings, but Phyllis could discern, in some of the frames, faces peering out—faces of people wearing long-ago fashions: the women in lacy, flouncy collars and the men in dark coats and curled wigs.
Clement shuddered at all the faces, flickering in the light. They seemed to be staring right at him, like loitering zombies about to emerge from the walls …
Daisy was sniffing at the hallway from the safety of Phyllis’s bag. The terrier’s small snout was twitching and ruffling as she tried to detect any smells that might tell her if anyone was about.
‘The fire’s through there,’ Phyllis told Clement, indicating the room with the opened double doors and the wavering light. ‘That’s probably the drawing room.’ She paused for a few seconds, listening. All she could hear was the slow, deep tick-tock from the grandfather clock, and Daisy’s business-like sniffing.
All at once a near-blinding flash of lightning threw the hallway into a burning white glint. There was a thunderclap, and in the crashing burst of sound, in the merest of those brilliantly bright seconds, Phyllis saw a figure at the top of the stairs, lit up by the lightning, looking down at her.
She gasped loudly and blinked.
The brightness vanished; the thunder rolled away. When Phyllis looked again, the figure was gone. 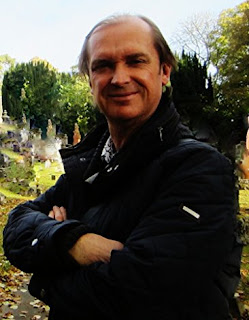 All of the Cairo Jim chronicles are now being e-published by 9 Diamonds Press, available through Amazon's Kindle platform. A brand new Cairo Jim story will appear in 2018.

When he is not writing stories of magic, mystery and adventure, Geoffrey appears at Phyllis Wong author shows with his wife, world-renowned magician Sue-Anne Webster. Together they bring the magic of story and the story of magic to life before their audiences' very eyes!