Ferrying Riches by A. Woodley 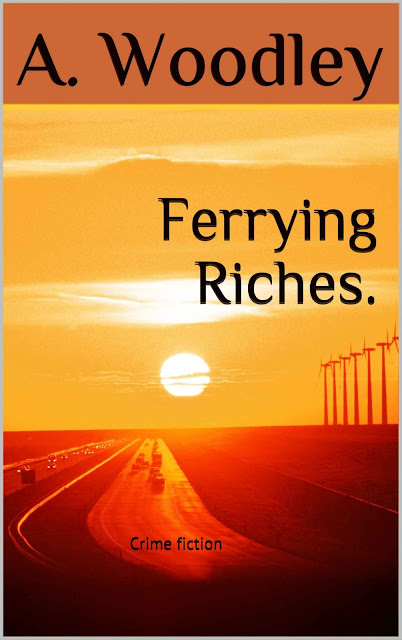 Gabe and Derry Thomson were twin brothers looking for a new life, in a new town, where they found themselves mixed up in the type of criminality that they’d only ever seen in films before.


Gabe and Derry Thomson had left home as soon as they possibly could.
They were thirty five year old twin brothers that had always done everything together.
The twins had scraped up enough money between them, to pay for the fuel for the journey, the rent and deposit for the first month on somewhere to live and enough to last them a month or two as long as they were careful.
They would both need to find work fast and they didn’t mind what it was, as long as they didn’t have to go back to their parent’s place, where they’d had their own rooms in the converted barn, beside the main house.
They had left home after a huge argument with their parents, worse than any of their previous rows and there had been some quite bad ones in the past.
They had done lots of menial jobs that needed no qualifications or real training, the type where they would spend one hour or less on the job and they’d be fully trained.
None of the jobs had lasted long, in the Grover plastics factory they’d managed to stick it out for almost two months.
Six weeks was more than enough in the quarry and a four month stint of gardening, until the weather got too bad.
The gardening jobs dried up and their boss just had to lay them off.
They were happiest in a job when they were tinkering about with cars and they had a plan of owning and running their own garage someday, doing repairs, MOTs, full services, selling fuel, maybe a valet service and they’d even have a little grocery shop attached.
It would be impossible to realise their plan in their hometown, there were already three big garages there, competing for what little trade there was.
Most of their business came from small repairs and fuel sales to the locals or from passing trade.
With each of the garages being situated on one or other of the bigger roads going in and out of town, between them they had the entire area covered.
It would be financially suicidal to attempt to run yet another garage anywhere near to any of the three existing places.
When they left their hometown, they didn’t know where they would end up but they packed up their belongings, filled the fuel tank, made some sandwiches, packed some drinks and stocked up on cigarettes before heading south.

Born in London (South East) many moons ago (1954) & now living in the land of the concrete cows & roundabouts (we're famous for both) in Milton Keynes, Buckinghamshire, UK.
I started writing poetry & children's books so long ago but did nothing with them.
The children's books need illustrations & that is far beyond my capabilities.
The poetry sat in folders, unattended & forgotten for the most part until I recently came across some publishing info online.
I decided to dig out my old writings & sent off a manuscript to a publisher, they liked my manuscript & offered me a contract but wanted to share (refundable) costs, which was too much for my poor finances to cope with and I had no interest in vanity publishing anyway.
I was then told about self publishing with Amazon & checked it out, so here I am.
My 1st two ebooks  'Glimmer of hope' and 'Life and more'  are random collections of 50 poems in each book,
I do understand that there isn't a huge market for poetry but maybe some people will enjoy my efforts.
I think my favourite poem so far that I've written is 'I want to be a tree'.
My Daughter & Granddaughter have given me lots of encouragement to get published over the years & it now felt like the right time to try.
Eventually I plan to get my children's books published with the help of my Grandaughter, who is artistic but doesn't have a lot of free time, so that could take a while.
I have now written several more short stories, a book of 20 murder short stories (Murder Melange) and I'm currently writing a new book.